It seems like Producer Gul Khan and her banner 4 Lions Films has always been at the receiving end when it comes to controversies, which have many a times lead to negativity, is the popular notion.

The shows made by 4 Lions Films have seen huge popularity, considering that the production house has always made shows that have ignited the flavour of ‘romance’. Their shows have always touched the chord of youngsters, and have garnered humongous popularity. Also, actors who have been part of their shows have become huge icons, reaching great heights.

Talking about their shows, Geet Hui Sabse Parayi, which talked about the story of a young girl Geet and a stern man by name of Maan Singh Khurana, grew high in popularity charts and actors Drashti Dhami and Gurmeet Singh Chaudhary became household names.

Balance is key to success and I am happy that to balance this negativity, there is so much of love around. Yes, negativity can pull you down, but in my case, there is far more amount of love coming from fans

The ongoing show Ishqbaaaz has redefined the way TV shows can be made. The class, the mass appeal and the grandeur that it brings, along with the charisma of its leading actors, have created impeccable impact.

Well, one thing which stays evident is the fact that inspite of the strong programming lineage, the makers and their shows usually get subjected to negative wave from fans.

So much is the level of animosity that the reel spills into real with the makers getting trolled and abused in personal capacity.

We at IndianWikiMedia.com decided to get into a conversation with the maker herself, the one and only Gul Khan for an answer.

When asked about the reason for all the controversy and negativity around her and her shows, Producer Gul answered, “Well, if you ask me, the controversies and negativity around me and my shows have been on for a while now. The first controversy I can think of happened when our popular show Geet shut on Star One. The entire channel Star One shut down, not just one show Geet. They rebranded the channel to Life OK and shut each and every show, so it was really ridiculous and illogical to attack me for shutting Geet. That was the time when there was maximum negativity. Things went so bad that there was even a death threat. We had even lodged a complaint at cyber crime.”

To get up in the morning, wishing to see the day when IPK shuts.  Why would anybody wish so bad for someone? Shivani Tomar is a new girl and she is working really hard. And you say you are Barun’s fan. This is Barun’s comeback show

Getting to the reason why this happens with her, Gul explained in detail, “I don’t want to answer why there is controversy. You have to answer that. I am still looking for an answer for this. But my friends say that my shows create a lot of impact on the youngsters. That is why they react with a lot of passion. I feel that these youngsters are too passionate and are very attached to the show, and that is why we should not take this negativity to heart because lot of this is coming from people who are fazed. Sometimes they feel the show is not going in the right direction; they feel betrayed and it comes out in some sort of negativity. And sometimes the negativity goes out of hand.”

Where there is hatred, there is love too. And love comes in leaps and bounds.

Gul went on to talk about the adulation and appreciation she receives from her fans. “Balance is key to success and I am happy that to balance this negativity, there is so much of love around. Yes, negativity can pull you down, but in my case, there is far more amount of love coming from fans. I am really in awe and shocked of the fan clubs; they send me pictures. They send me so many cups with my pictures; they send me so many poems. People write lines. So I feel the amount of love totally supersedes the amount of negativity.”

Likes and dislikes for TV shows are a general norm, but in this case, the hatred actually has reached levels of insanity wherein fans have never shied away from throwing personal attacks on the maker.

Getting fed with comments on social media about being a ‘whore’, ‘bitch’, ‘liar’, ‘a woman who needs to wear a bra and work’, ‘arrogant at work’, and to the extent of wishing for the woman to die by coming under a bus, wherein the fan fantasizes of being the driver who killed her, are indeed a tad over the top.

Comments like ‘you are a whore’, ‘you are having an affair’, ‘you need to come under a bus and die’, stems out from the fact that whoever writes this is anonymous. It is very easy to hide behind a rock and throw a stone

And this is what Gul receives as comments day in and day out on social media. Talking about this personal attack, Gul stated, “Well, they feel passionate about the show, its couple, on romance shown etc. And when you are passionate, your anger is also passionate. I also feel that comments like ‘you are a whore’, ‘you are having an affair’, ‘you need to come under a bus and die’, stems out from the fact that whoever writes this is anonymous. I do not know who the guy is, where he/ she lives, who the parents are, what’s the kind of upbringing he/she gets. But for them, they know me, my face, my work, my shows etc. It is very easy to hide behind a rock and throw a stone at someone. Indeed, in this case, anonymity really adds to the creepiness. Secondly, I feel sad for these people. One must be really unhappy with himself, and in his heart to get up in the morning and start sending such bad wishes to someone who has not done anything to you. To get up in the morning, wishing to see the day when IPK shuts.  Why would anybody wish so bad for someone? Shivani Tomar is a new girl and she is working really hard. And you say you are Barun’s fan. This is Barun’s comeback show. Obviously the show is the daily livelihood for so many people, including the person they say they love. You have so much of hatred in your heart to constantly wish ill for others. Well, it is only a reflection of the state of mind the person is in.”

“Having said this, we make our shows with all conviction, sincerity and hard work. The more the negativity, the more hard work we will put in. No matter how much negativity they show the amount of love and adulation we get online just makes up for everything and put a smile on my face. To all the fans out there you can’t imagine the strength you give me by sending your love. You have become the force behind me that inspires me to do great work. Can’t thank you guys enough for just being there… Love you all! ,” expressed Gul signing off.

Truly, positivity can bring to a stop any negative force… And at this juncture, we only say that being positive in life can bring happiness all over…. 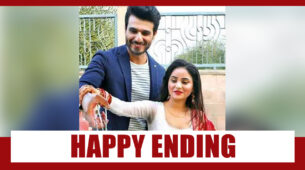