Here’s the thing: the internet is a bad place. This is, simply, indisputable. But there’s also good pockets to be found. That’s where memes come in. While online culture seems to become more and more toxic each year, it’s meme culture that makes Logging On totally worth it. The year 2019 swept in and brought us some beloved and quickly forgotten jokes, trends, and meme templates.

In 2019, audiences spoke about several topics on various platforms and within no time, memes on the same started trending on social media. Audiences have trolled TV actors and made their memes and many times the celebs served themselves as memes. Either way, fans laughed.

Yeh Rishta Kya Kehlata Hai is the fourth longest-running show in Indian Television industry. It premiered on 12 January 2009. The show currently stars Mohsin Khan and Shivangi Joshi in the lead roles. It airs on Star Plus and streams on Hotstar. It is the story of Naira, the daughter of Akshara and Naitik, who marries Kartik Goenka and tries to be a good wife and daughter-in-law but has to face many challenges throughout her journey.

The show is one of the best shows and their fans are showering their love on the show. The show is successful in achieving fans from all generations and their story is loved by people.

Let’s take a look at some of the hilarious memes of Yeh Rishta Kya Kehlata Hai that will tickle your funny bones. 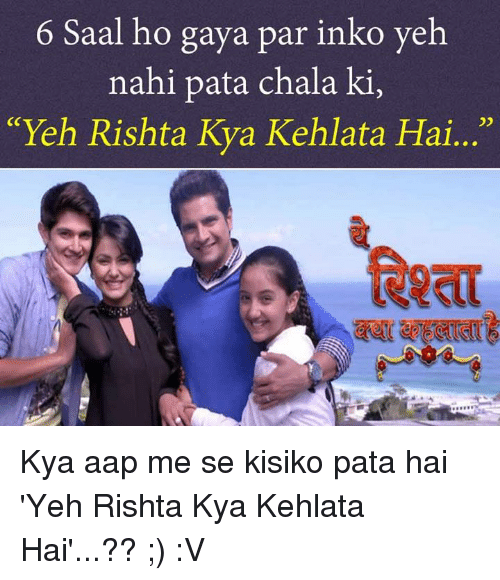