Hina Khan and Rohit Jaiswal are melting our hearts with their cute pictures. Hina was already famous for playing the role of Akshara in the soap, Yeh Rishta Kya Kehlata Hai, and Rocky became an overnight sensation when he appeared in one of the episodes of Bigg Boss 11 and proposed to her on national television.

We all know she is in a relationship with the well-known supervisor producer of her show ‘Yeh Rishta Kya Kehlata Hai’ named Jayant Jaiswal, aka Rocky Jaiswal. The couple is intending to marry soon.

One among many such couples, who fell in love on the sets of Yeh Rishta Kya Kehlata Hai, is none other than Hina Khan and Rocky Jaiswal.

The couple has been roaming the world together and sharing posts, which are giving us major vacation vibes. The couple has been in the limelight due to their cute pictures. And the fans are waiting for when they will get married soon.

Check out the pictures of their vacay, which is making us all envious. The cuteness is just too much to handle. 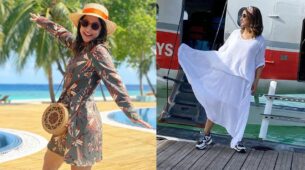