Bapuji from TMKOC is Younger then Jetha, Checkout! Taarak Mehta Ka Ooltah Chashmah is one of the longest-running shows on Indian television. The sitcom recently completed its 11 years run. Since the day it went on air on 28th July 2008, the show has been entertaining its viewers to the fullest. The popularity of the show can be realized from the fact that its actors are called by their on-screen names rather than their real names. Whether it is Jethalal, Nattu Kaka, Sodhi or Bhide, these characters have become a part of the audience’s lives.

One such character is played by Amit Bhatt, who is seen in the role of Jethalal’s bapuji, Champaklal Gada. The actor plays a character, which is double than his real age. Amit is even younger than Dilip Joshi who plays the role of his son, Jethalal Gada. Amit, who turned 48 on this August 11 has earlier worked in shows such as Yes Boss and F.I.R.

Amit has done shows like Khichdi, Yes Boss, Chupke Chupke, Funny Family.com, Gupshup Coffee Shop, F.I.R. He was recently a part of Salman Khan’s home production Love Yatri. He looks quite different from his on-screen avatar in real-life and has to go through a makeover for the role of Champak Lal.

Yes, we know. Even we were shocked at first understanding that our chachaji is younger than his son Jethya. But what a journey and what a transformation! The iconic show is only standing tall because of all the characters and proudly Amit Bhatt can say he is the oldest and the important person on the show. Right? 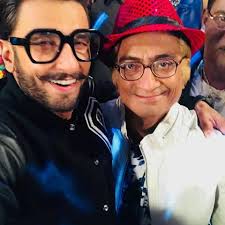