Hosted by the dumdaar Salman Khan, the show premieres this June 4, and airs every Monday & Tuesday at 8:30 PM 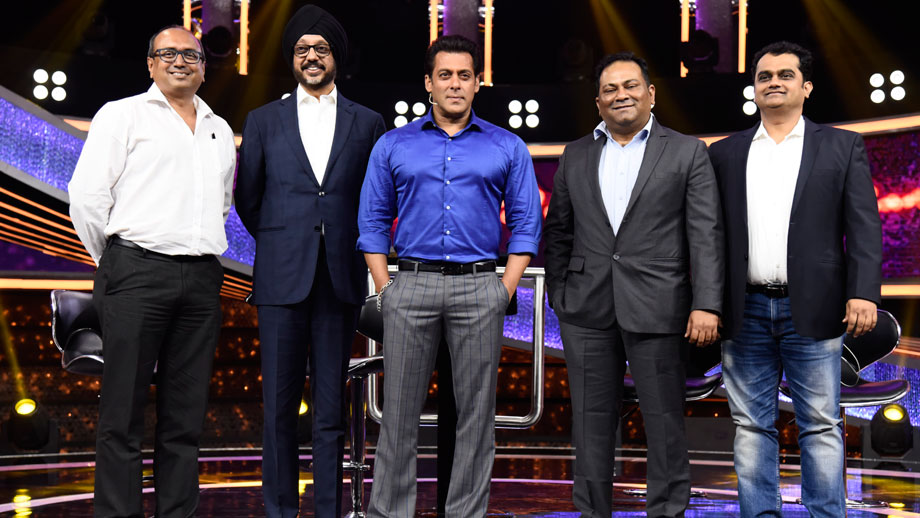 When the most loved actor from the Indian film industry, Salman Khan, asked “Kitne Pratishat Bharatiya…” on Sony Entertainment Television (SET) in his inimitable style and charisma, he got the entire nation hooked on to Dus Ka Dum. That was in 2008. The show, that saw the debut of a superstar on Indian television, is all set to come back after 9 years with the very same superstar. It will give an opportunity to millions of aam aadmi of the nation to test their power of observation. Dus Ka Dum, promises to be sau pratishat (100%) enthralling and interactive.

Staying true to the insight Ye Khel Hai Anumaan ka, Salman ka aur Poore Hindustan ka, Dus Ka Dum packs a punch with its riveting format, new madats (assists) through the three rounds and a lot more interactivity. Even before its launch, Dus Ka Dum has registered a whopping 1.5 million people taking part in its survey on the SonyLIV app, giving people an opportunity to audition for the show and stand a chance to play the game as a participant on television.

The format is simple and appealing giving participants ample time to interact with their beloved star as well as revel in their victories. The first round will see two participants compete through 5 Ka Punch which is a knockout round. The player who answers at least 3 questions correctly out of 5, moves to the next round while the other contestant gets knocked out. Each question in this round is worth Rs. 20,000/- and the contestants will get 15 seconds to lock the estimated percentage on their respective screens. The madat (assist) available in this round will be Strategic Timeout where the contestant can consult with their families to arrive at an answer. Even the eliminated contestant doesn’t go empty handed! The second round is called 10 Guna Dum where the participant stands a chance to multiply the earnings from round one to Do Guna, Chaar Guna, Cheh Guna, Aath Guna or Dus Guna. The contestant has to set an estimate window on the ‘India Meter’ instead of an absolute percentage number. The madats (assists) available in this round are – Andaza Apna Apna, where the contestant can take help from studio audience and Dumdaar Daayra, where the obsolete bracket on the India Meter will be disclosed making it a lot easier for the participant.  While the contestant must play all the five questions, a minimum of three right answers in this round leads the contestant to the last and final round which is aptly titled Super Sawaal. This is the most edgy and nail-biting stage in the game! The correct answer gives the contestant 10 times the amount earned in the second round. But the wrong answer will leave the contestant with only 10% of the amount won in the second round. However, the contestant can choose to quit the show if in a dilemma and claim the money won in the second round.

Sony Entertainment Television (SET) revolutionized the way content was consumed by introducing the second screen engagement during Kaun Banega Crorepati (KBC) – which was the biggest in the world. 30 million users registered for KBC Play-Along and around 3.5 million concurrent users played-along for every KBC episode, setting a global benchmark. Taking the success and the scale of the 2nd screen initiative a step further, Dus Ka Dum aims to become the most interactive television show in the world. Through the SonyLIV app, the engagement with the audience will happen in three phases viz. ‘Survey’ leading to ‘Audition’ and ‘Play Along’ once the show launches. It is a first in the history of world television that viewers’ insights received will form the backbone for the content in the form of probable questions in the show. Also, users get to keep availing exciting prizes with the Play Along on the SonyLIV app once the show goes on-air.

Produced by Big Synergy, this new season of Dus Ka Dum boasts of an all new format re-designed and developed by the in-house creative team of Sony Entertainment Television (SET) and Sony Pictures Television, UK.  With its TV + Digital approach, the show promises to deepen engagement with the viewers.

NP Singh, CEO, Sony Pictures Networks India:“Dus Ka Dum is a format re-envisioned by our in-house creative team and Sony Pictures Television, UK. The advent of second screen, pioneered by Sony Entertainment Television during Kaun Banega Crorepati (KBC) last year, has revolutionized the way content is consumed. This time around, the number of respondents (about 1.5 million) to the Dus Ka Dum survey on our SonyLIV app, has been an eye opener. This data not just highlights the popularity of the show but also highlights an evolved consumption pattern amongst the audience. Along with an interesting format, Play Along will provide an opportunity to people at home to be part of Dus Ka Dum game play.  Furthermore, I am delighted to welcome Salman Khan back on Sony Entertainment Television.”

“Dus Ka Dum is an extremely relevant and interesting show format for a heterogeneous country like India. It celebrates the power of observation, life experiences and informal education; therefore, it is a game for almost everyone in India. It is truly a game of the common woman and man – it doesn’t bound the contestants by any filters like their educational, social or economic background. Anyone who has experienced life with an open mind stands a chance to be a winner here. To add to that, Salman Khan, whose appeal is beyond boundaries, is perhaps the most suited to bring this game alive. His easy charm and ability to connect with common man and woman makes for a riveting television experience.”

“The show marked my debut on television and will always stay close to my heart. I am happy to return with this show after 9 long years! I feel a lot richer with the experiences shared by the participants on the show and the everlasting love of my fans.”

It is always a pleasure to be associated with the channel, Danish Khan and his team. The BIG Synergy team worked closely with them as well as the licensors, Sony Pictures Television, to rejuvenate Dus ka Dum with format freshness, questions about being Indian that other surveys seldom ask, and a terrific line up of contestants from across the length and breadth of the country, all the while staying true to the essence and appeal of the original version. The X factor of the show is of course Salman Khan, showcasing his trademark swag and spontaneous style, his earthy sense of humour, his warm connect with the common man, and his instinctive, unorthodox approach to entertainment. His enjoyment of the game is truly infectious. It’s a fun-filled show which makes you think and re-think about common things. The registration response was overwhelming and we do hope the nation once again enjoys the much-loved show and star in this brand new outing.”