On Sunday 28th January, Zee TV will telecast a special episode on “Beyond The Dreamgirl” featuring legendary actress Hema Malini and celebrated author Ram Kamal Mukherjee in their most popular reality show Dance India Dance. Hema and Ram Kamal will be talking about their experience on penning an authorized biography on the life of ‘dreamgirl’ and beyond. […] 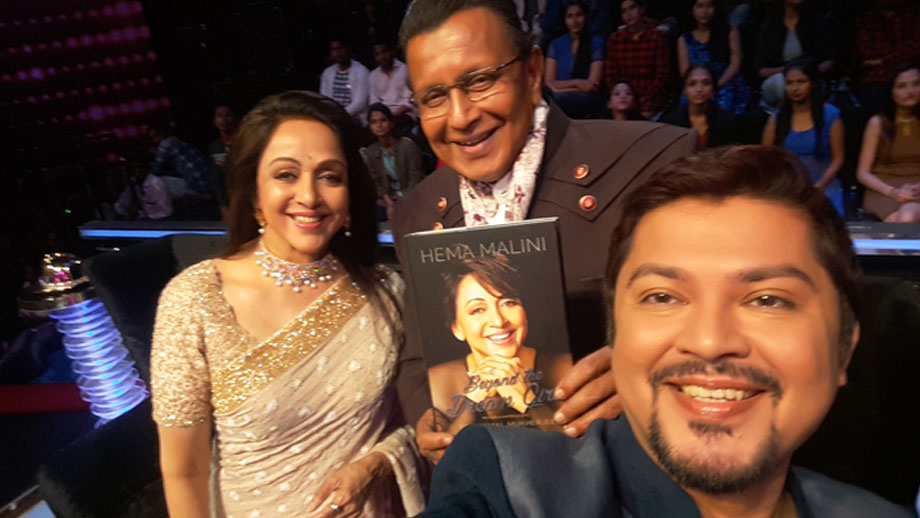 On Sunday 28th January, Zee TV will telecast a special episode on “Beyond The Dreamgirl” featuring legendary actress Hema Malini and celebrated author Ram Kamal Mukherjee in their most popular reality show Dance India Dance. Hema and Ram Kamal will be talking about their experience on penning an authorized biography on the life of ‘dreamgirl’ and beyond. This will be the first ever book to get featured in any danced based reality show in Indian television.  This certainly makes Ram Kamal, India’s first biographer to appear as a guest in any reality show.

The 90 minute show will feature Hema Malini getting introduced on her signature song Kisi shayer ki ghazal (Dream Girl) by the young and talented participants from Dance India Dance. “It’s an honour and privilege to share stage with Hemaji, who is an epitome of grace and talent,” said grand master Mithun Chakraborty while welcoming Hema on the show.

In presence of judges and noted choreographers Marzi Pestonji, Mudassar Khan and Mini Pradhan, the book was officially presented by Ram Kamal and Hema Malini. “I need an autographed copy of the book,” said Mithun and quickly managed a marker pen for Hema to get it inked. While the judges marked it as a historical moment in Dance India Dance, stating that Hema Malini is a stalwart, and she is known for her dancing prowess. “A biography on Hemaji is like a grammar book for any dancer or choreographer. I think everyone should read this book to know what it takes to become a star like Hemaji,” said Mudassar Khan. While Marzi jokingly asked Mithun if he could write a book on him too? “Pehele theek se Hindi toh seekh le, fir sochenge!” was Mithun’s prompt and witty reply hinting at his ‘Parsee bawa’ accent.

Hema Malini will be seen enacting the iconic Sholay sequence after almost 40 years. Mithun added, “When the producer mentioned that Hemaji will be coming for the show, we thought of recreating her scene with dhanno from Sholay, which happens to be my favourite scene too.” But there was a small hurdle; Hema was not too sure about the scene because she is recovering from a knee injury and didn’t want to take a chance. It took finally Ram Kamal to convince Hema to ride the ‘tonga’ once again after four decades. “Hemaji is very particular about everything. I know what she would like and what she won’t. I guess that much once should, after writing two books on her,” said Ram Kamal jokingly. But eventually, she enjoyed the entire segment with dhanno and got a standing ovation from the audience for her ‘Basanti’ act. Hema Malini wittily added, “I am extremely fond of two Bangalees, one is Mithun and another is Ram Kamal. How can I say no to them?” Speaking about Ram Kamal, grand master Mithun said, “I know Ram Kamal since last two decades. He is a terrific writer, and I have already read Beyond The Dreamgirl. I think his fluidity and simplicity are the two aspects that make for an interesting read.” Published by HarperCollins India, Beyond The Dreamgirl has already bagged two prestigious awards in Mumbai and Jaipur.

Executive editor Shantanu Ray Choudhuri said, “Such platforms are very important for a book like this. Hemaji is India’s first female superstar, and people still admire her. She is loved by the mass, and Dance India Dance is the most popular massy reality show since past six years. We are thankful to Zee TV and Mithundafor this gesture.” The show will be simultaneously aired at 183 countries across the globe.

While Hema and Ram Kamal shared many anecdotes from the book, participants paid musical tribute to Hema from her chartbuster Mere Naseeb Mein from Naseeb. Choreographer Mini Pradhan requested Hema to join in a small jig on her song, and she did a jig with the participant. “I don’t know about others, but my dream is definitely fulfilled today, as I got an opportunity to dance with Hemaji,” added Mini.

Author Ram Kamal Mukherjee said, “My relationship with Zee TV started as a producer when I did co-produced a finite series Bin Kuch Kahe for them. I am thankful to Dr Subhash Chandra and entire Essel Vision Production for making this possible for my book. I respect Mithunda, and I have been watching this show for last six seasons. I think this is the right platform to talk about someone like Hemaji, because even today people from various parts of our country idolize her as a dancing star, and I am sure they would like to know about her journey and achievements.”

A specially baked fruit cake was organized by Essel Vision Productions to mark 50 glorious years of Hema Malini in Bollywood. In the show Hema revealed untold stories about Dharmendra, Esha and Ahana, also on why Rekha calls her every year on her (Hema) mother’s birthday, why Esha used to remove nail paints from her toe nails as a kid, why Rajesh Khanna had more female fans than any other actors, what makes Deepika Padukone special from other heroines and why Jaya Bachchan is very close to Esha and why Shah Rukh will always remain special amongst all the Khans.

If you are looking for an unfiltered entertaining weekend, then you can’t miss this episode of Beyond The Dreamgirl with Hema Malini and Ram Kamal.