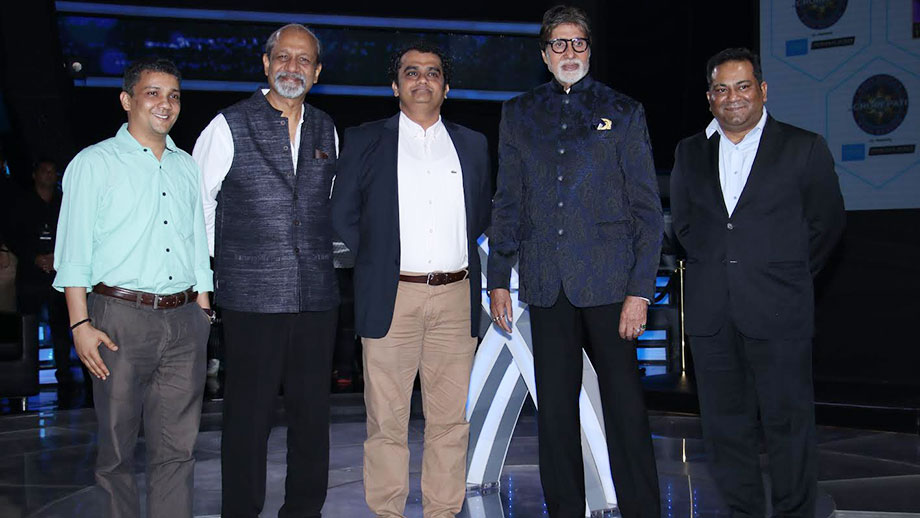 Deviyon aur Sajjanon, it’s that time of the year when the legendary host – Mr. Amitabh Bachchan beckons you to brush up your general knowledge as Sony Entertainment Television (SET) gears up to premiere the 10th season of Kaun Banega Crorepati (KBC). The show that taught India to value the power of knowledge and gave the common man the confidence to dream big, is in its 18th year of existence since it first appeared on TV screens way back in the year 2000. Kick-starting its 10th season with the campaign #KabTakRokoge,KBC celebrates the spirit of resilience in people. Every single participant – past, present and future – at some point in their lives, have persevered to make a dream come true. The campaign evokes the emotions of every KBC aspirant. Viewers can look forward to a special‘Curtain Raiser’ episode which will be telecast on Sony Entertainment Television on Sunday, September 02, at prime time.

This year, the show received the highest ever, record-breaking registrations of over 31 million within a span of 15 Days. With the participants trying to crack the ‘Fastest-Fingers-First’ to get to the Hot Seat, this year, the show promises to be a visual delight for the viewers with the well-integrated use of Augmented Reality (AR) making television viewing a truly phenomenal experience. While 50:50, Audience Poll and Jodidaar, the much-appreciated Lifelines, have been retained, this year will see the return of ‘Ask the Expert’ lifeline wherein one expert will be available to the contestant via video call link to help the contestant with an appropriate answer. Also, for the first time in the history of the show, audio-visual questions, on varied subjects ranging from sports to politics, have been included in the format. Furthermore, every Friday, the show will host – ‘KBC Karamveer’ – individuals whose heroic actions and good deeds have brought about a positive change in the society thereby becoming an inspiration for many.

With KBC Play Along on Sony LIV, viewers can enjoy the thrill of the gameshow by participating and matching their power of knowledge with the contestants on the hot seat simultaneously, starting 3rd September. With daily prizes up for grabs, viewers can work towards maintaining their position on the leader-board so that they may have an opportunity to feature on the show in the finale week as a participant. Furthermore, one lucky winner will stand a chance to win a Mahindra Morazzo.

Co-produced by Big Synergy and Studio Next – a division of SPNI, KBC Season 10 is co-powered by Vivo V11 Pro and Mahindra Marazzo while Aakash Institute, Axis Bank, Asian Paints, CEAT, Raymond and Syska Wires & Cables are the associate sponsors on the show.

“Kaun Banega Crorepati in its 10th season, will showcase some game-changing innovations that are certain to heighten the viewing experience of the show. Mr. Amitabh Bachchan, as the host, will captivate us once again with his charismatic personality and eloquence. With an increasing demand for content, we are venturing into becoming a content production company with Studio Nxt. This newly formed venture begins its journey with co-producing the 10th season of KBC in partnership with Big Synergy. In the future, Studio Nxt will be an independent arm that will produce new IPs whilst leveraging the existing ones, thereby becoming a global content creator that cuts across boundaries and cultures.”

“KBC has been a trailblazer of its time on Indian television. The number one show of 2017 with 114 million viewers through the season and 30 million users engaging via the second screen initiative – Play Along on mobile, has gone ahead and set a benchmark for itself globally. This year, with record breaking registrations, technological advancements in the format with an integrated use of Augmented Reality, a first on Indian Television and innovations in the second screen engagement, we look forward to enhancing the viewer engagement with our product.”

“My journey with KBC has been enriching in many ways. Year on year, I wait in anticipation to meet the KBC aspirants, who come with a hope to fulfill their dream – to achieve something big in life. Not many make it to the Hot Seat or are able to win big. But they give me a lot more in return. They give me the strength to move ahead with a smile, looking forward to a new day and new beginnings. I am truly inspired by each contestant and I am grateful for this experience.”

“The record breaking registration numbers, only reinstate the enormous anticipation for the show. What is remarkable is the way contestants have evolved over the years – from their consumption patterns to their adeptness with the digital shift. The attitude however remains constant – Kab Tak Rokoge! They are unstoppable in every way and we salute their spirit of resilience.”

“KBC, through the years, has evolved in so many ways. It has become a reflection of the people of this country and their changing attitudes. You will see representatives of a New India every day on the hot seat. And once a week, KBC Karamveer will be featured as a tribute to these wonderful social change agents, who continue to work towards bringing about a change in the real transformation in society, with selfless dedication. They are truly an inspiration for many. Every Friday, a special episode has been dedicated to the inspirational Karamveers, which will see real-life heroes play for a cause as they speak about their extraordinary lives and work.”