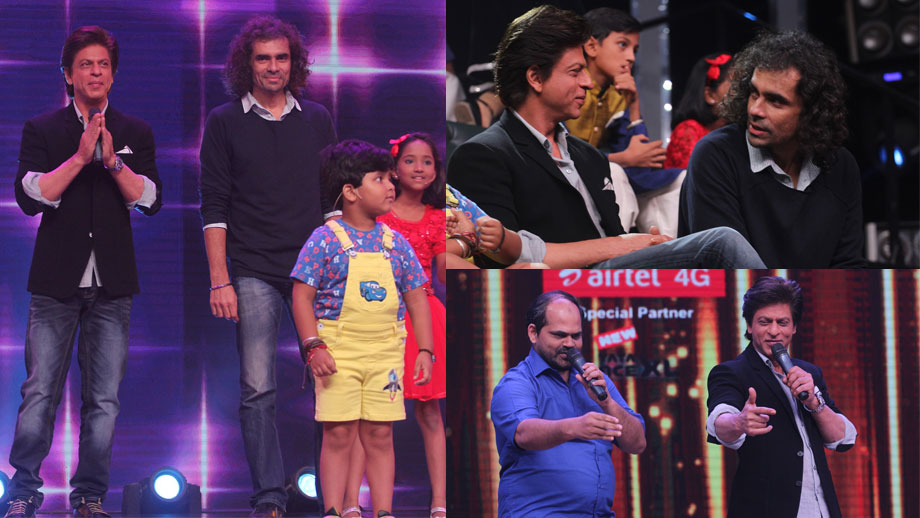 Amul Sa Re Ga Ma Pa Li’l Champs on Zee TV, India’s biggest singing reality show for kids is the No 1 non-fiction show this year. The competition heats up with Top 5 super talented new ‘Toofans’ joining the show to give a takkar to the Top 5 ‘Bhukamps’.  This Sunday, 6th August at 9 PM, the Badshah of Bollywood Shah Rukh Khan and ace director Imtiaz Ali will grace the show with their presence to promote their highly-anticipated flick ‘Jab Harry Met Sejal’.

The episode started with quite a bang! The King of Romance Shah Rukh Khan and director Imtiaz Ali were seen in great spirits mingling with the mentors and contestants. Watching the Li’l Champs pack in one scintillating performance after another, the celebrity guests were left awestruck by their singing ability and couldn’t stop praising each one of them. While all the kids put their best foot forward, it was Yumna Ajin’s performance that left King Khan with goosebumps! The bundle of talent from Kerela sang the beautiful track ‘Jiya Re’ from the movie ‘Jab Tak Hain Jaan’.

Completely taken in by Yumna’s singing abilities, Shah Rukh Khan said, “I am very pleased to experience the best talent of our nation on this prestigious platform. Yumna, you were amazing and trust me, I don’t have words to describe my true feelings. I am so glad that I could see you performing live as it was absolutely mesmerizing. Hats off to you, li’l girl!” He then revealed very humbly, “Actually promotions are just an excuse…I wanted to come on Li’l Champs and be inspired. I’m so inspired right now after hearing these talented Li’l Champs sing that I will be working for another 100 years surely.”

Equally floored by Yumna’s talent, director Imtiaz said, “I was completely swept away by your performance. Yumna you are such a great performer and it’s not the last time that we are hearing you sing. You will become a renowned singer one day and we will keep listening to your amazing voice. You will certainly go a long way.”

Thrilled by the appreciation that she received from her favourite actor, Yumna asked Shah Rukh on what it takes to become a hero as her father has always aspired to become one, but couldn’t fulfil his dream owing to the responsibilities he had on his shoulders. Being Shah Rukh’s die-hard fan, her father had watched all his movies. Shah Rukh who was touched by Yumna’s father’s hard work and sacrifices that he made for his family and saluted him for being a true life hero in his own charismatic manner. Shah Rukh tells Yumna,  “I’m not the real hero, I’m just doing my job. Real heroes are the ones who sacrifice their dreams just to make their loved ones happy. And, your father is the real-life hero as he has sacrificed so many of his own dreams for his family and specially for you.” Fulfilling her father’s lifelong dream and leaving him on cloud nine, the actor helped Yumna’s father recite one of his famous lines from his movie ‘Om Shanti Om’. Everyone present on the set were awestruck by Shah Rukh’s warmth and affection!

With King Khan on a roll and making everyone’s dreams come true, this Sunday, 6th August, don’t miss watching the magic of singing as the Top 5 super talented Toofans will give a takkar to the Top 5 Bhukamps and floor the celebrity guests with their mellifluous voices. To catch all the masti and some extraordinary performances, stay tuned to Amul Sa Re Ga Ma Pa Li’l Champs every Saturday and Sunday, at 9:00 PM, only on Zee TV.