Kundali Bhagya premieres on Monday, 12th July at 9:30 PM and will air every Monday to Friday, only on Zee TV 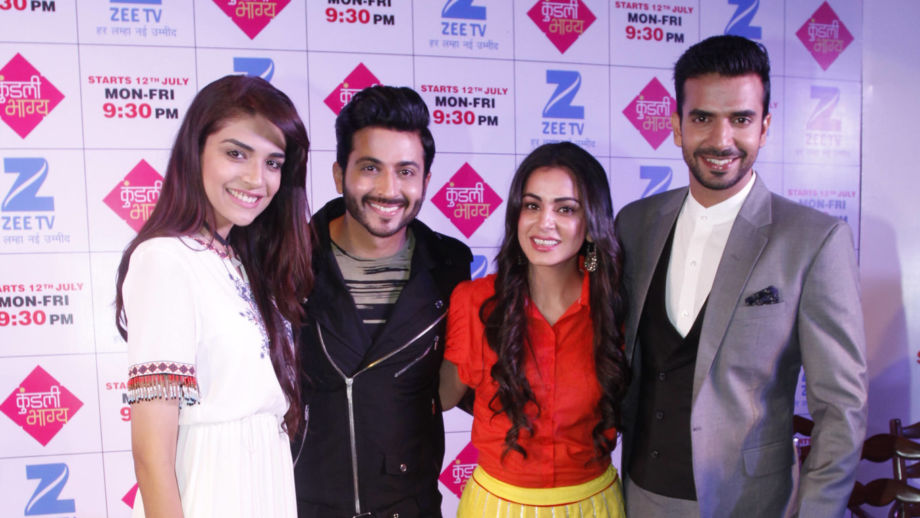 Three years ago, Zee TV’s audiences welcomed Abhi and Pragya into their lives with arms wide open, making Kumkum Bhagya the most watched and the highest-rated television show in India. Viewers have loved their sizzling chemistry and their extraordinary relationship keeps them glued week on week, year on year. The show is approaching 1000 episodes but Abhi-Pragya’s saga of love is yet to unfold! In the meanwhile, the multi-layered narrative of KumKum Bhagya and its underlying sub-plots have the potential to be told from different perspectives and varied lenses. An ace at compelling narratives, Ekta Kapoor brings alive several characters – each of them real, unique and with a back story of their own. Their flaws, their quirks, individual traits, aspirations and insecurities make them immensely relatable. With fascinating stories of so many interesting characters waiting to be told, a new show is on the cards! Exploring a parallel universe that emerges from the world of KumKum Bhagya, Zee TV and Balaji Productions innovate and introduce ‘Kundali Bhagya’.

Starting 12th July at 9:30 PM, every Monday to Friday on Zee TV, this new primetime fiction series will narrate the story of Pragya’s two sisters, Preeta and Shrishti, their attempts to reunite with their mother Sarla and their dynamics with an affluent Punjabi family – the Luthras, whose elder son Rishabh Luthra’s celebrity management firm manages Abhi’s music career. His younger brother Karan Luthra has an effortless swag that makes him an unabashed Casanova and a lady-killer before the star cricketer he is. The journey of sparks that will fly when the paths of Preeta, Rishabh, Karan and Srishti intersect is called ‘Kundali Bhagya’.

Deepak Rajadhyaksha, Deputy Business Head of ZEE TV, says, “Zee TV has always strived to experiment with formats and bring its viewers unique and fresh content. After the success of Pavitra Rishta, Jodha Akhbar, Kumkum Bhagya and Brahmarakshas, we are extremely happy to associate yet again with Ekta Kapoor’s Balaji Telefilms to bring an innovative narrative ‘Kundali Bhagya’. It introduces a new set of characters in an all-new world and will be replace our hit primetime show, Ek Tha Raja Ek Thi Rani which was not only a strong differentiator but met with an overwhelming response and has had a glorious run of two years.”

Ekta Kapoor, Managing Director and Creative Director of Balaji Telefilms says, “Over the last two decades, Balaji Telefilms in collaboration with Zee TV has created some great content. With our new show, Kundali Bhagya, we present a first-of-its-kind concept – an all-new interesting and engrossing show that emerges from the sub-plots of an already existing show. We will introduce Pragya’s sisters – Preeta and Shrishti and the Luthra brothers- Karan and Rishabh. We’re hopeful that audiences will fall in love with each of these endearing characters as we have gone through hundreds of auditions before locking the impressive young talent. The writing for this show is extremely strong in terms of characterization and the engaging screenplay should leave audiences hooked at the end of every episode.”

The handsome Manit Joura will be seen playing the role of Rishabh Luthra, the level-headed, responsible elder brother who manages Rockstar Abhi’s (Played by Shabir Ahluwalia) career.  The flamboyant younger brother – the cricket star Karan Luthra – will be played by the dashing Dheeraj Dhoopar. The gorgeous Shraddha Arya will play the quintessential middle class, working girl Preeta who has a practical head on her shoulders and values to back her up. Her exact opposite in every way – the spunky and free spirited younger sister – Shrishti will be played by the lovely Anjum Fakih.

Kundali Bhagya premieres on Monday, 12th July at 9:30 PM and will air every Monday to Friday, only on Zee TV.