While you stay at home during this phase of social distancing, Zee TV introduces a 9 to 11 PM band with three exciting new stories that reassure one about the power of love in overcoming testing times. 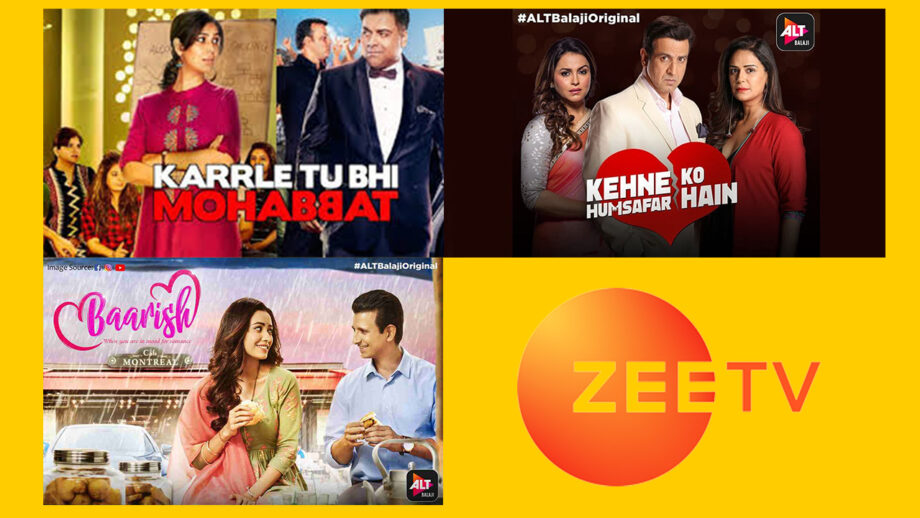 Placing its viewers on the highest pedestal over the past 27 years, Zee TV, India’s leading Hindi General Entertainment Channel, has always provided cutting-edge content and kept them entertained through thick and thin. In this phase of social distancing and self-quarantining at home, Zee TV plans to send a strong message of reassurance with a special, exclusive band of three new shows, each building a strong narrative about the power of love and how it helps us tide over the most challenging times. Starting March 25th, viewers can now get hooked on to Zee TV’s finite series like ‘Karle Tu Bhi Mohabbat’, ‘Baarish’ and ‘Kehne Ko Humsafar Hain’ for the first time on television between 9 PM and 11 pm every weeknight!

‘Karle Tu Mohabbat’, starring Ram Kapoor and Sakshi Tanwar, is about a struggling superstar recovering from his addiction to alcohol, and his new counselor. It will follow the story of how the superstar and the counselor fall in love while at his estranged daughters’ wedding and all the drama that ensues. Starting from 25th March, Karle Tu Mohabbat will air from 9 pm to 10 pm, only on Zee TV.

‘Baarish’, airing at the 10 pm slot, stars Sharman Joshi and Asha Negi. The show will explore the lives of two strangers from starkly different backgrounds. While Anuj (Sharman) is a Gujarati businessman, who had left studies at a tender age to take over the family business, Gauravi (Asha) is a Maharashtrian girl who feels education is of prime importance and works in Anuj’s company. When the two get married because of their families, will they realise they are like chalk and cheese or fall in love eventually?

Only time will tell!

At 10:30 PM, ‘Kehne Ko Humsafar Hain’ delves into the love triangle between a

interior designer Ananya (Mona Singh). Initially, everything seems hunky-dory in the family, but when the actual truth comes out, everyone is shocked. Will Rohit stay with Poonam or will he sacrifice his whole family for Ananya? Tune in to Zee TV to find out!

Talking about the new shows, Zee TV Business Head Aparna Bhosle revealed, “In times where social distancing is the need of the hour to curb the outbreak of COVID-19 and people are spending more time indoors, the idea is to provide audiences with the most engaging entertainment for the entire family. We have a new 9 to 11 PM band with three new finite series – Karle Tu Mohabbat, Baarish and Kehne Ko Humsafar Hain, that will reassure viewers that we can conquer the biggest challenges with the power of love. Each of the shows has strong TV faces that the masses are closely attached to. We are also reintroducing classics like Kasamh Se and Brahmrakshas as well as facilitating binge-watches of crowd favourites – Kundali Bhagya and Kumkum Bhagya, so that the audience has a wide variety of content to view and can enjoy this extended family time together.”

So, what are you waiting for? Switch on your TV and get entertained with fresh, original content along with some iconic classics only on Zee TV!