The young singer Khuda Baksh was overwhelmed with emotion as he expressed his gratitude to the stage for launching him in the world of music and paving the way for a bright career. It’s often said that fortune favours the brave and smiles upon them with all its splendour. This has been proven in its rightful essence by Khuda Baksh who hails from Punjab, one of the top 3 contestants from the 9th season of Indian Idol. The promising singer had enthralled everyone with his melodious voice on India’s biggest singing reality show and impressed audiences and celebrities from the music industry. The musical genius from the land of the five rivers made an appearance on Sony Entertainment Television’s Indian Idol 10 along with noted film maker JP Dutta, legendary lyricist – Javed Akhtar and versatile singer  Sonu Nigam for promoting their upcoming movie – Paltan. The singing reality show which has been synonymous with a platform that has paved the way for exceptional singing talent is already winning hearts across the country. The Punjabi munda Khuda Baksh got emotional being on the stage of Indian Idol that made him shoot to fame.

Khuda Baksh who scored a special place in the hearts of audiences across the globe with his heartfelt singing has got his first break in Bollywood! All thanks to the biggest platform for budding singers in the country – Indian Idol and Anu Malik. The young singer was overwhelmed with emotion as he expressed his gratitude to the stage for launching him in the world of music and paving the way for a bright career.

A visibly happy Anu Malik exclaimed, “Khuda Baksh is our child and there are millions of people who love his voice. He has a unique voice that can be rightfully termed as ‘Naayab.’ All of us are very proud of Khuda Baksh. When I called him for the song he came to the studio and learnt the song there itself and performed. What a brilliant guy. I am sure he has a glorious future ahead of him and we wish him all the best!” 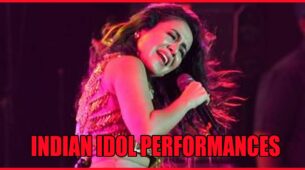