Sidharth Shukla asks his fans to stay cool at home! Handsome hunk Sidharth Shukla stepped into the house of Bigg Boss 13, many people predicted that he could become the winner of the show. He managed to win a lot of hearts via his charming personality and he emerged as the winner.

The actor has been very active on social media and is also trying his bit in spreading awareness during a difficult time due to coronavirus pandemic.

Also Read: My career is on pause: Sidharth Shukla

Recently, the actor uploaded a video wherein he was having ice cream and urged his fans to stay cool and stay safe at home. He captioned the video “I’ve found a way to keep my cool during these times 🍧🍦 How about you? #StayKoolStaySafe”

Take a look at the video!!

I've found a way to keep my cool during these times 🍧🍦 How about you? #StayKoolStaySafe

Sidharth became the season’s most tweeted about contestant, with Asim Riaz in the second position. Ironically, Asim became the first runner-up of the show as well. Actress Rashami Desai, who made it to the season’s top 5 finalists, was third in the list, followed by Himanshi Khurana and Shehnaz Gill. 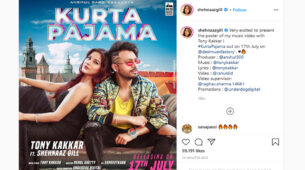