Disha Vakani the talented and versatile actress has lived the role of Dayaben of Taarak Mehta Ka Ooltah Chashmah for years now. Even when Disha is not shooting for the show, the makers and channel believe that she will come and resume shoot and are keeping the character and actor’s memories alive through flashbacks.

Disha is a charming lady who is very natural in her acting. Disha who is from Ahmedabad, is a theatre actress who migrated to films and TV later.

She is married to the Mumbai based Chartered Accountant Mayur Padia. They got married in 2015. She has a girl by name Stuti Padia. Disha actually moved out of the show during her pregnancy phase and has not returned yet after she was blessed to be a mother.

Talking about her real family, Disha’s father Bhim Vakani is a Gujarati theatre artist. Her brother is Mayur Vakani who is also her onscreen brother in the show. She has a sister too.

Disha is blessed with a good marital life with Mayur Padia and is enjoying her motherhood with daughter Stuti Padia. 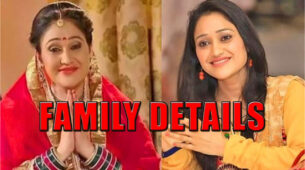