Sumedh Mudgalkar and Mallika Singh are one of the cutest on-screen jodi on the small screen. The actors play the roles of Krishna and Radha in Star Bharat’s popular show RadhaKrishn.

The chemistry between the two actors on screen is not only evidence of their talent but also makes the story easier to watch and way more believable.

Sumedh and Mallika initially didn’t know one another, however then, they grew to become better of buddies. Sumedh and Mallika’s on-screen chemistry is cherished by the viewers and that’s due to the off-screen rapport that they share.

Apart from being best buddies. The two also share some common interests or hobbies. As we know Sumedh loves playing guitar and he has also uploaded the videos on his YouTube page. Mallika also likes to play guitar. She is also seen practicing in her free time.

The two actors are also fashion inspiration for many. Always dressed to perfection, these two make us go all gaga over their outstanding fashion choices. Their power-packed dressing always strikes a cord, no matter the occasion.

Do you agree with us? Comment below and let us know! 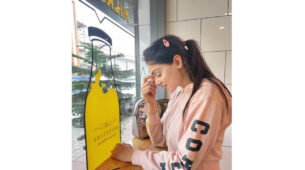