India’s one of the biggest reality show Indian Idol season 11 is about to come to its end. This season this platform witnessed some of the most fabulous contestants who have already made names for themselves even before the show could announce a final winner. As the other end nears and the top 6 gear up for the next level, Bollywood’s legend Dharmendra ji graced the show with his presence and cheer for the contestants!

After Shahzaan and Ankona gave a melodious performance on the song ” Kal ki Haseena Mulaqat ke lie”, Dharam ji shared an incident from his struggling days when he saw a throwback picture from his past on Indian Idol season 11. He mentioned that during that period he used to live in a garage as he didn’t have enough money to buy his own place in Mumbai. In fact, the second picture was from his first job, he used to work in a drilling firm and he earned 400 rupees before he came to this city!

Aditya Naryan told ShahzaAn that everyone struggles in their life and these struggles are like life lessons which should be valued a lot.

Vishal while appreciating Ankona and Shahzaan said “Ankona you are only 15 and the way you sing is commendable and Shahzaan you have created a genre for yourself with your singing which is remarkable. 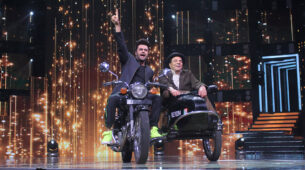