This weekend, get ready to witness Judges Challenge on India’s Best Dancer as Remo & Team grace the stage as guests Sony Entertainment Television’s India’s Best Dancer is the currently the most popular show dance show on the small screen. As the show inches towards finale, the audience will witness nail-biting competition among the contestants. This weekend, the viewers will be in for a treat as the contestants will take on the judge’s challenge where they will be paired with each other without their choreographers on Saturday. Come Sunday, get ready to witness one of the most crucial ‘Battles’ on India’s Best Dancer. To witness the judge’s challenge, the show will welcome Remo D’Souza and his team; Salman Yusuff Khan, Punit J Pathak, Sushant Pujari, Rahul Shetty and Abhinav Shekhar. They also promoted their new song Log Kya Kahenge, which is directed by Remo D’Souza.

Remo and his team had a great time on India’s Best Dancer as they enjoyed watching spellbinding performances by the contestants. The contestants were neck-to-neck with each other and put up a tough fight with their phenomenal acts. Moreover, the contestants also gave a special tribute to Remo Dsouza on his famous tracks such as Badtameez Dil and Haye Garmi. After seeing a plethora of unique acts, the dancing gurus Punit and Salman also shook a leg with Malaika Arora on the song Chokra Jawan. This weekend promises many fun moments, endless banter and electrifying performances.

Also Read: ‘I have three children, but Geeta Kapur will be my first child’- Farah Khan on India’s Best Dancer! 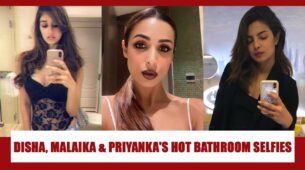 Have You Seen These Sexy And Stylish Pictures Of Aishwarya Rai Bachchan, Kareena Kapoor, And Malaika Arora?