Disha Vakani is one of the popular TV actresses. She is known for her iconic character Dayaben from Tarak Mehta Ka Ooltah Chashmah.

She went on to become a sensation among the fans with viewers of every age turning into a fan of the actress’s spectacular acting skills and comic timing.

While the viewers loved her in the show, she decided to leave Taarak Mehta Ka Ooltah Chashmah after she delivered her first baby. Not only the Tarak Mehta family but also the fans miss Daya and her signature garba moves.

In real life, Disha is married to a Chartered Accountant, Mayur Pandya. Disha’s wedding had come as a surprise to many of her fans and just like her marriage, she had kept the news of her pregnancy under the wraps too. It was on November 30, 2017, when Disha and Mayur had embraced parenthood with the arrival of their little angel, Stuti Pandya.

Disha and Mayur’s family was completed with their daughter Stuti’s arrival! We wish them a blissful time ahead. 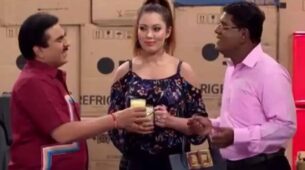