Mouni Roy, the stunning Indian beauty, is known for her glamorous outfits, hot looks and elegant fashion sense, which make her look happening at all times. She owns every outfit she wears and looks like a lady boss. We have seen her on both, the silver screen and the big screen, and her Instagram is proof that her hot looks are a topic of discussion.

Mouni Roy is an Indian film and television actress. She is best known for playing Krishna Tulsi in Kyunki Saas Bhi Kabhi Bahu Thi, Sati in Devon Ke Dev…Mahadev and Shivangi in Naagin. She has also played the role of Meera in Junoon – Aisi Nafrat Toh Kaisa Ishq.

Along with the television world, Mouni also rules the Bollywood film industry. She has played the lead character alongside Akshay Kumar in the sports biopic movie, Gold. The movie was a super hit and the actress received a good response for her acting.

Her Bollywood journey is far from ending. Mouni’s career is just taking off and her fans have been extremely supportive throughout this journey of hers. In her most recent project, Mouni starred alongside John Abraham in the movie, Romeo Akbar Walter.

Mouni’s fans are also in awe of her hot stylish looks. Just like her characters, Mouni’s glamorous looks have been absolutely stunning. The audience has loved her the most in her hot and sexy looks.

Mouni’s style is on point and trending. She styles her clothes according to her comfort.

Today, Mouni shared a smoking hot picture on her Instagram.

Below is the picture. Have a look at the picture below and do let us know how you liked it. 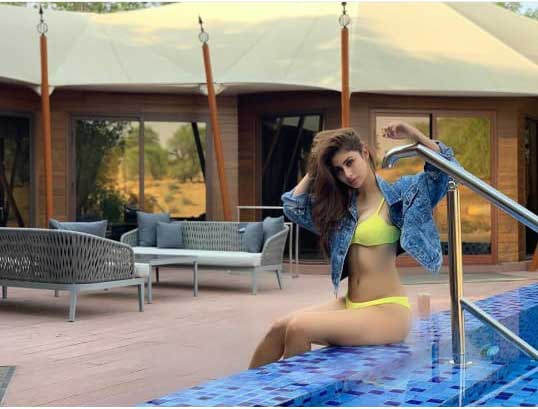 Sachin Vashist is ruling the modeling world with his incredible talent