Parth Samthaan vs Mohsin Khan: Who do you think is the telly hunk? | IWMBuzz
Subscribe Now
Television | Snippets

We often come across stars on Indian television that we just can’t choose the best between. Two such stars are Parth Samthaan and Mohsin Khan and we just can’t seem to choose between the two. Here’s where we call for your help. Parth Samthaan is one of the most loved actors on Indian television. The nation fell in love with him ever since he first appeared on screen and he now has millions of fans across the country. The actor made his first on-screen debut through the MTV show Kaisi Yeh Yaariyaan which was a success and he is now seen playing the role of Anurag on the show Kasautii Zindagii Kay alongside co-actress Erica Fernandes. The actor is loved for his amazing acting skills and dialogue delivery. But apart from his work we just can’t help but swoon over his dark eyes, precious smile and well-sculpted face. However, what we really can’t stop gawking at is his well-built physique.

On the other hand, we have Mohsin Khan, who is one of the stars the nation fangirls over the most. We loved him ever since he first made his on-screen debut. It is no doubt that he has millions of fans and followers across the country. But it is amusing how he has gained so much love and support in no time. The actor rose to fame through his big break in the daily soap Yeh Rishta Kya Kehlata Hai where he plays the role of Kartik Goenka and is seen sharing screen space with Shivangi Joshi. The actor is admired for his intense acting skills that touch our hearts but what we truly can’t forget is his killer features like his piercing eyes, flawless skin and flowy hair. Yet, it is extremely hard to get our eyes off his amazing body that we are all dying to know the secret to. 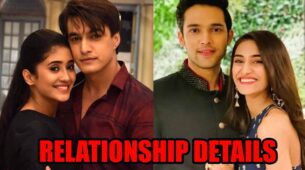