What happened all of sudden that the actress Rajshree Thakur got replaced by Rati Pandey overnight? CHECK OUT! We all see our favorite shows on the Tv screen and love to see our favorite actors and actresses on-screen. At a moment we like the chemistry between the lead actors and actresses so much that we can’t imagine them with anyone else. Well but what if we have to? This happened recently in Star Plus show Shaadi Mubarak where Rajshree Thakur got replaced by Rati Pandey and here’s why!

We loved the way Rajshree Thakur and Manav Gohil shared their chemistry on-screen. They both are seen in the show Shaadi Mubarak where Rajshree Thakur plays the role of Preeti Jindal who happens to be a widow and Manav Gohil plays the role of Keertan/ K.T Tibrewal whose marriage is in trouble. Both of them work together in a marriage bureau firm called Shaadi Mubarak and there onwards starts a story of self-respect, friendship, and love.

The show was going very smoothly until a few days ago we got to know that the lead actress, Rajshree Thakur will be replaced soon. She is the mother of a small daughter and because of the hectic schedule, she can’t manage the time here and there so she decided to quit the show.

In a recent interview with Times of India, she said, “The real reason about my exit is that I was unable to cope up with the hectic schedule of working for 12 hours and 26 days in a month, especially having a three-year-old daughter at home.” The actress added, “We never fought over anything and everything happened on a mutual note. I had put in my papers two weeks back and had informed the producers well in advance about my exit.” 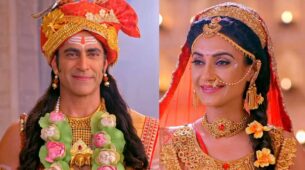