Papon revealed his hidden talent apart from being a singer From being an ordinary Assamese boy to finding his calling in music, Angarag (Papon) Mahanta has established himself as one of the most soulful singers of the country. Recently, on the sets of &TV’s singing reality show The Voice India Kids, the new-age star of Assamese folk-fusion Papon revealed his hidden talent apart from being a singer!

The upcoming episode of The Voice India Kids will not cease to amaze viewers as it features a Coach ki Kasauti where coaches have set up tough challenges for the contestants, starkly different from the genres they excel in. But, not to be left behind, the contestants will also present one challenge to their respective coach. A source present on the set revealed that all the members of Papon’s team challenged him to pleat braids in Shruti’s hair within 60 seconds. While most thought he would be challenged, Papon startled the entire team by perfectly plaiting Shruti’s long beautiful hair in well under the allotted time. When asked about the secret behind such flawless braids Papon said, “I used to keep long hair in my initial days. For the past 20 years, I cut my own hair. I prefer to not visit salons when I need a haircut.” All the other coaches were astonished to hear about the hidden talent harboured by the profound singer.

To know more revelations and hidden talents of the musical maestro, tune into The Voice India Kids every Saturday-Sunday at 9:00 p.m. only on &TV. 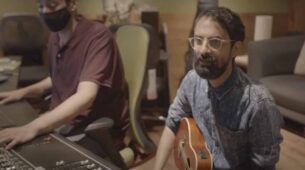