It’s that time of the year when love is blooming in everyone’s heart and with Zee TV always aiming to enthrall its viewers with its entertaining shows, is all set to present to its audience a visual treat as Zee TV in association with Balaji Telefilms will air a two hour special show – Salaam-E-Ishq! Boasting of innumerable, popular actors, this special episode of Salaam-E-Ishq will be all about fun, laughter, romance and breath-taking performances by popular actors like Shabir Ahluwalia, Sriti Jha, Sehban Azim, Krishna Kaul, Mugdha Chapekar, Naina Singh, Madhurima Tuli, Vishal Aditya Singh, Adnan Khan, Tunisha Sharma, Prince Narula and Yuvika Chaudhary.

While the audience will witness some power-packed performances by actors, the adorable chemistry between Yuvika Chaudhary and Prince Narula cannot be missed! The stars started off with a gripping performance, dancing to songs like Rasiyaaa, Ang Laga De and Hai Rama. But in-between the performance, Prince stopped and proposed to Yuvika once again. It was really a light-hearted moment when the actor told his wife that he will never stop troubling her. She also promised never to stop loving him. “Yuvika is my best friend and I am constantly annoying her with my theatrics. But I know I’m a lucky guy to have her as my wife. She is always beside me during the low points of my life”, Prince revealed.

After being caught off-guard by Prince Narula’s proposal on stage, the actress stated, “This is the second time he is proposing to me. Just like the first time, this one is equally romantic as it happened on the stage of a show that is dedicated to love.”  If that was not enough, the couple ended their performance with a spectacular act on Main Agar Kahun.

A night full of love, romance and entertainment, the audience will surely be on the edge of their seats this 29th February and 1st March. In fact, the special Salaam-E-Ishq episode has a lot of surprises in store for its viewers, especially the dance performance by the Kumkum Bhagya jodi of Abhi (Shabir Ahluwalia) and Pragya (Sriti Jha) as well as a melodious act by last season’s Sa Re Ga Ma Pa Li’l Champs winner Sugandha Date, which will surely leave the audience amazed. 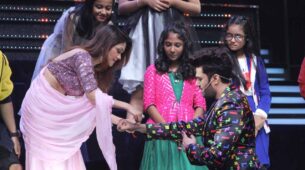 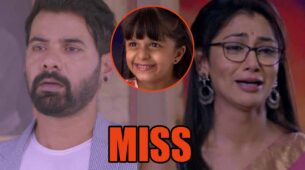