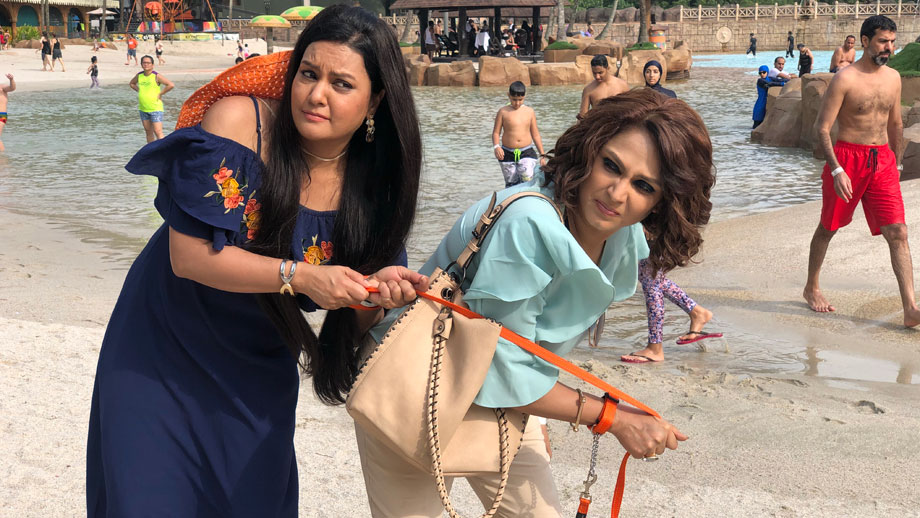 &TV’s show Meri Hanikarak Biwi that has two women Pushpa aka Sucheta Khanna and Devina aka Anjali Mukhi at logger heads constantly took their rivalry to an all new level. Their nokh-jhok was not confined to the Indian terrain only but the duo was seen taking this all the way to Malaysia as well where Sucheta actually puts a leash on Anjali to ensure that she doesn’t leave stranded.

It so happens that as per the track, Devina has always wanted to keep Pushpa at a distance from the house and the wealth that she could acquire in the family. With a strong determination to finally get rid of Pushpa, Devina plots a plan to misguide her and leave her helplessly out on the roads, desperate to find her way home. Having left her alone several times before, all her plans fail when Pushpa works smartly and decides to put Devina on a leash so that she could never get lost. An infuriated Devina taken aback by her plan’s failure will be seen struggling against Pushpa’s absurd and humorous decision. Shot at the beautiful Sunway Lagoon in Malaysia, the ladies were seen ditching their regular vibrant sarees for a cool summer look.

Talking more about her character’s role to this track, Anjali Mukhi a.k.a Devina said “Devina really wants to stay away from Pushpa, but her idea of putting my character on a dog leash makes every attempt of mine futile. While shooting this, I remember she kept pushing me and pulling me everywhere and I used to keep firing at her” she said laughingly. Emphasizing excitedly on her trip, the actress said. “We got to see quite a lot of places, despite our hectic schedules in Mayalsia but we were often stranded for vegetarian food and had to often hunt for something to eat. A few restaurants opposite our hotel were a saving grace.”

Adding on to her excitement Sucheta Khanna a.k.a Pushpa commented “While shooting in Malaysia, we made good use of the gaps in between our shoots to visit few places and shop. We got few weird glances for being dressed in sarees though. We were shooting at one of the most beautiful locations there but what added was how the scenes were written and presented. It had a perfect touch of humour. Hopefully the audience is going to love us in this funny element too!”

To know more tune in to the Malaysia special of Meri Hanikarak Biwi every Monday – Friday at 10:00 pm only on &TV