Suchita Trivedi was overjoyed when she was said she could eat whatever she wants for her role in Indiawaali Maa! | IWMBuzz
Subscribe Now
Television | Snippets

Why was Suchita Trivedi overjoyed? There is nothing in this world as surreal as a mother’s warm embrace. From helping you take your first steps to see you become a successful person in life, mothers always take pride in their children’s tiniest achievements. Sony Entertainment Television’s latest offering Indiawaali Maa portrays a story of a mother driven by compassion, faith, and a heart full of love for her son, decides to save him from all the problems he is facing in his life.

Actress Suchita Trivedi, who is known for her splendid work in Indian Television Industry, will now essay the role of Kaku in the show. She is a naïve yet strong-willed woman who knows her son down to his bone. An endearing story portraying Kaku as Indiawaali Maa, she is also a brilliant cook and is known to cook the yummiest dishes on the show. Actress Suchita Trivedi who has always played a perfect bahu on television will now be stepping in the shoes of a perfect mother too. And surprising to play the sweet and cuddly mother, and according to the producers she was the perfect choice for the role because of her cute plump look!

While giving the insights about Kaku, Suchita said, “Playing the role of Kaku comes from inside and I dive into my role with full enthusiasm and passion.”

Elaborating further, she said, “I have seen many people lose weight to fit into their role. But on the contrary, I love the way I am. Though I was following a diet and a fitness regime before I was offered this role, I was filled with joy when Jay (producer of Indiawaali Maa) asked me to be the way I am and eat whatever I wish to! As Kaku is a sweet and cuddly mother and to capture that vibe of a homemaker who makes excellent food, they asked me to maintain the cute bubbly avatar I always have. I am very happy that I can continue eating my favorite food without the restriction of a diet. Though I take my fitness seriously, I still like having yummy food.”

Watch Suchita Trivedi as Kaku in Indiawaai Maa from 31st August, Monday to Friday only on Sony Entertainment Television at 8:30 PM. Indiawaali Maa spoiler alert: Hasmukh and Kaku to re-marry on their anniversary Indiawaali Maa spoiler alert: Cheenu doubts on Hasmukh and Kaku having an affair Indiawaali Maa spoiler alert: Hasmukh and Kaku’s relationship to get exposed in front of Cheenu? 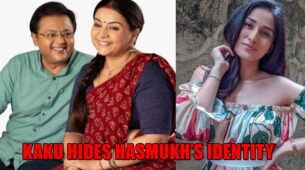