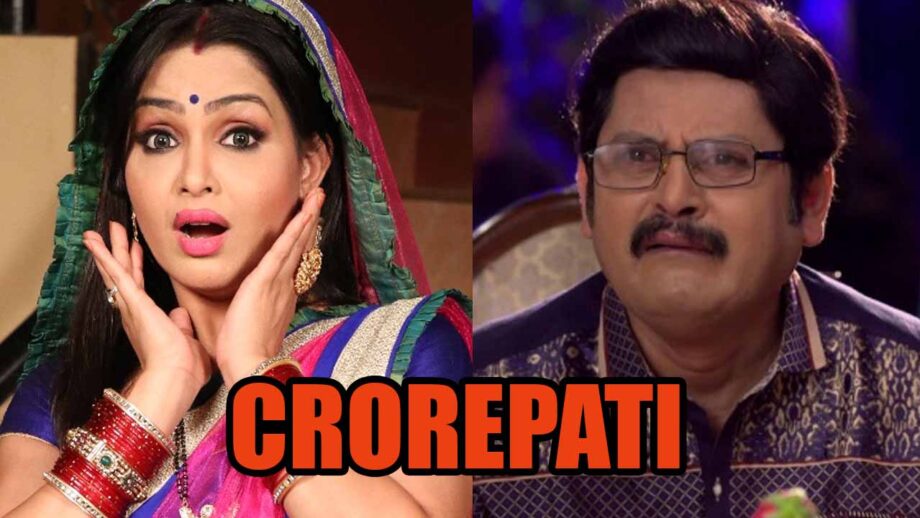 &TV’s cult show – Bhabhiji Ghar Par Hai has etched a special place in the viewers’ heart for its lead characters quirks, comic timing and complete hilarity. In continuation of its joyride with more amusing and entertaining plots, the fresh episodes will have several comical plots that are bound to leave the audience in splits. In the all-new episodes, a fakir will come into the lives of Angoori Bhabhi and Tiwari Ji which will make them a crorepati! Yes, we’re talking about a whopping 2.5 crores!

It begins with a fakir asking Angoori (Shubhangi Atre) for water. The sweet and kind Angoori gives him sharbat instead of water. Meanwhile, Tiwari Ji (Rohitashv Gour) asks him ways in which he can accelerate his business growth. The fakir tells him to feed 100 bananas to a poor for good fortune to activate. As soon as Tiwari Ji feeds those bananas, a lawyer visits them and informs Angoori that her uncle has left her 2.5 crores! Enthralled, Tiwari Ji asks her for the money as he wants to invest in better business prospects. However, Angoori being her benevolent self wants to give all the money in charity. It irks Tiwari Ji who then along with Vibhuti Ji (Aasif Sheikh) he plans to execute his kidnapping by blackmailing Angoori to get the money in the form of ransom.

Sharing her thoughts on this exciting surprise Shubhangi Atre shares, “In the fresh episodes of Bhabiji Ghar Par Hai, this is the first big surprise! Angoori and Tiwari Ji have never seen that kind of money, so while Tiwari Ji is in his dreamland, my character will only do what she feels is right! It’s one of the most interesting episodes I have shot for and, the reactions these men gave throughout is a must watch! Audiences are in for some super hysterical time! It is hands down one of the best episodes so far!”

Tiwari Ji a.k.a Rohitashv Gour says, “The new episodes are a hilarious concoction of twists and thrills. This crorepati episode is full of that! Tiwari and Vibhuti go berserk after hearing of that kind of amount! Till what extent they go to get that money from Angoori is something audiences are going to love! Get ready for a laughter riot!”
Will Tiwari and Vibhuti be successful in their plan? How will Angoori Bhabi react to the kidnapping act? In the quest of trying to impress each other’s wives, there will be more amusing and entertaining plots between Modern Colony’s neighbouring couples, the Mishras and the Tiwaris. From Mishra Ji’s quirks, Tiwari Ji’s comic timing, to Angoori Bhabi’s innocence and Anita Bhabi’s smartness, there will be a whole lot of new and fun stories offering a full dose of hilarity and laughter.