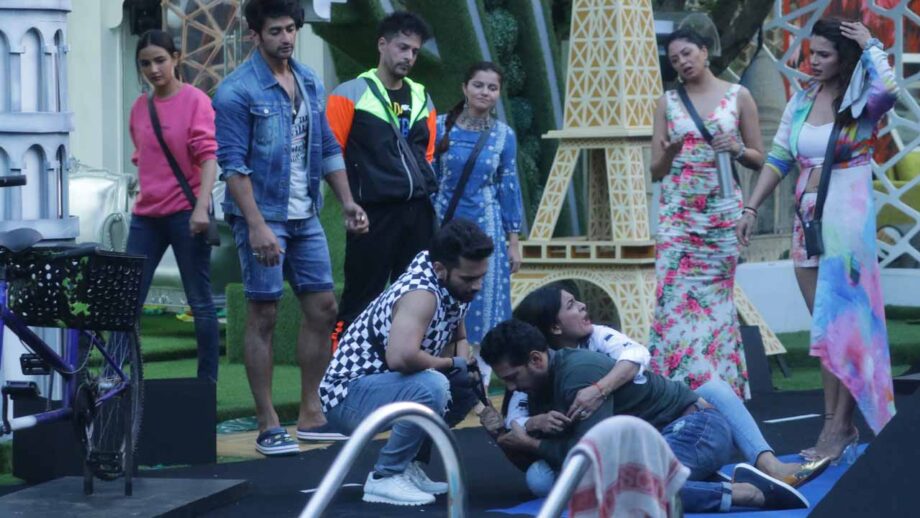 Things start on a hectic note on day 21 in the Bigg Boss house. Kavita Kaushik is seen throwing her weight around as a captain when she asks Rubina Dilaik to cut fruits for her breakfast. Rubina refuses to do so and says that Kavita, as a captain, can not take unnecessary advantage of her position.

Love blossoms again as Eijaz Khan is seen asking Nikki Tamboli about dyeing his beard. Nikki asks him to check with Pavitra on that since she believes Pavitra has feelings for him. Nikki also tells him that Pavitra is always talking about Eijaz with other housemates. While Eijaz is seen confessing that he is single since past three years, Pavitra is struggling to name her relation with Eijaz.

The second round of the Bigg Boss WorldTour starts and all the contestants are fired up about making sure they win the match! The contestants need to take the bags of others to win the task. Rahul Vaidya turns out to be the ace predator as he takes Eijaz’s bag and keeps it out of the Red Zone. He then turns his attention to Abhinav’s bag as he tells him to trust him with giving his bag to him. At the same time, Naina, who is the sanchalak in the task, disagrees on Rahul’s decision to keep the bag outside the Red Zone. Rahul and Naina clash big time over this.

Soon after, Pavitra and Rahul conspire to take Abhinav’s bag by force and manage to do so! Rubina gets angry on seeing her hubby lose the task and flares out at Pavitra and Rahul. Pavitra lashes out at Rubina and questions everyone about judging her nature harshly.

Who will win the bag task? Will Rahul emerge as the apex predator who has stolen the most bags? Will Eijaz and Pavitra be able to put their egos aside and have a sweet relationship?