Bigg Boss will pit the contestants of the red and green zone against one another which will decide who will stay in the green and the red zone respectively. The ‘tabadla task’ will continue today.

Tonight, Jasmin and Rahul will come face to face. Rahul will express his disappointment over the actress character assassinating him on national TV, particularly the ‘parvarish’ (upbringing) comment. Jasmin will defend herself and clear her stance.

Who will be in the green zone? 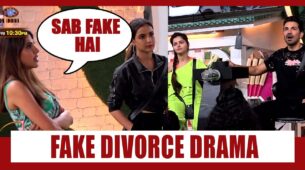