As we reported earlier, Rohan (Akshay Mhatre) gets shocked after learning about Chinamma’s pregnancy, whereas Kaku (Suchita Trivedi) gets happy. She also congratulates the couple but they are not ready to welcome the baby so soon.

Now, in the coming episode, Kaku gets a call from Chinamma’s mother and she visits her family to give the good news to them. However, Kaku gets to know a shocking truth about Rohan-Chinamma’s marriage. She learns that Rohan and Chinamma are not married and they have a live-in relationship. The lady gets shocked. However, she hides the truth from her husband Hasmukh

What will happen next? Will she confront Rohan?

Also Read: I would like to be as confident as Chinamma: Sheen Dass on Indiawaali Maa 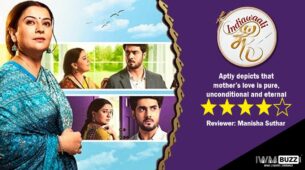 Suchita Trivedi was overjoyed when she was said she could eat whatever she wants for her role in Indiawaali Maa!