Kartik and Naira will don the avatars of Vasudev and Devki in Yeh Rishta. However, this twist in the tale has reunited mother with son!! Well, we are talking about Suvarna succeeding in mending her relationship with Kartik (Mohsin Khan).

The biggest moment in the Singhania family will happen when Kartik will accept Suvarna as his mother.

Now, the onus is on Kartik to change Shubham and make him accept his mother Suvarna, as she has been the one who has made the big sacrifice of opting to groom her step son by leaving her own son.

In order to do that, Kartik and Naira (Shivangi Joshi) will perform a skit to make Shubham understand the big sacrifice of Suvarna.

A credible source tells us, “Mohsin and Shivangi will don the avatars of Vasudev and Devki and will depict their pain when they sacrifice their new born. They will also portray how tough it is for a mother to leave her kid and move on.”

Will Kartik and Naira be able to change Shubham’s mindset? 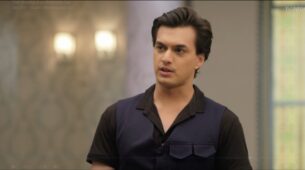