Kumkum Bhagya the popular Zee TV show produced by Balaji Telefilms has kept the viewers on the edge of their couch by bringing forth some unpredictable twists and turns with every episode.

As per the plot, Prachi finds Ranbir’s behaviour weird. She tells Shahana about the same hence the girl advises Prachi to propose Ranbir.

In the coming episode, Prachi meets Ranbir and tries to talk to him but he praises other girls in front of her. Soon, Prachi intervenes but Ranbir talks to her rudely and makes her cry. The girl gets upset with Ranbir’s behaviour and leaves.

Will Ranbir tell Prachi about their breakup? 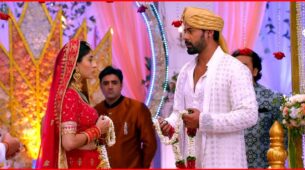