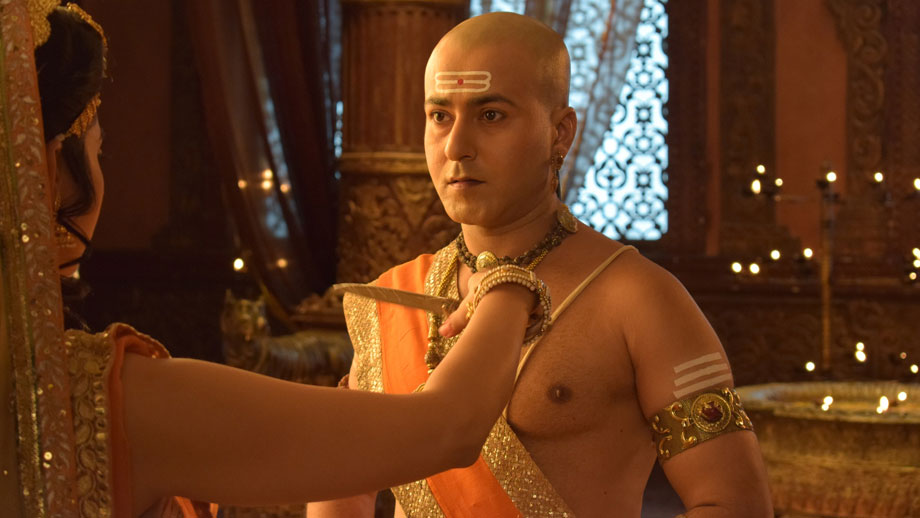 Rama’s life has always been full of challenges- whether in the darbaar or in his personal life. In the ongoing and the upcoming track, we will see how he uses his intelligence to solve not one but four back to back difficult and mysterious cases. At the end of each case, there is a lesson to be learned!

In one of the cases, we will see that while Krishnadevraya (Manav Gohil) is practicing sword fighting, his wife Tirumalamba accidentally cuts the King’s finger in a duel. Krishnadevraya faints and while the people of Vijaynagar are praying for the King’s speedy recovery, Rama (Krishna Bharadwaj) unintentionally ends up saying that ‘Whatever happens, happens for the good’. The King gets angry hearing this and asks Rama to prove his statement or states his finger will be cut.

In another case we will also see that, Queen Tirumalamba finds that King Krishnadevraya is losing his hair. She makes a medicinal drink for him which will help in his hair growth. The King reluctantly agrees to drink it but in the end, he throws away the drink which falls in a plate of sweets that are being brought for all the ladies in Vijaynagar for a ceremony that Tirumalamba had kept.

Next day, all the ladies including Chinnadevi (Sonia Sharma), Sharda (Priyamvada Kant), Varunmala and Saudamini but except Tirumalamba (Priyanka Singh) wake up with a moustache. Amma (Nimisha Vakharia), who didn’t attend the ceremony also wakes up with a moustache because Sharda had got sweets for her from the palace. Gundappa who had attended the ceremony in a woman’s attire also gets a moustache in the morning. Rama, Krishnadevraya, Tathacharya (Pankaj Berry) and everyone else in the court are shocked at this miraculous incident. Now Rama has to find a solution to this ‘hairy’ situation.

Adding to the madness, there is a rumour in the kingdom that now Rama has to put to rest. Queen Chinnadevi is under a misunderstanding and suspects Krishnadevraya of having illicit relations with Saudamini, the darbar’s courtesan. This rumour spreads like wild fire and just like a Chinese whisper it meaninglessly progresses to assumptions of Krishnadevraya’s marriage to Saudamini’. Rama has to use his intelligence and put an end to the rumour.

It doesn’t end there! In the next story, a merchant comes to the King’s court with three identical dolls to meet the advisors of Krishnadevraya. He challenges and puts forward a tricky question to the advisors asking them to spot the difference between the three identical dolls. After many attempts and examinations, everyone in the court fail to figure out the difference and answer his question. They all now depend on Rama to solve this test.

Will Rama be able to solve all these cases successfully or will such back to back challenges take a toll on him?

Commenting on these tracks, Krishna Bharadwaj who plays Tenali Rama said, “These are extremely interesting cases where again Rama gets caught in between situations or is challenged with difficult problems. He has to use his wit, intelligence and observation skills to solve all the cases. One case ends and the other one begins, he literally walks out of one problem and walks into another one.”

Commenting on the tracks, Manav Gohil who plays King Krishnadevraya said, “King Krishnadevraya is in a dilemma with these different difficult situations which he has to face. It will be very interesting to see if Rama successfully will be able to solve these tricky cases or no.”