Saath Nibhaana Saathiya 2 will see Kanak trying to ruin the plan of Gopi to bring back Ahem’s memory. What will she do? Saath Nibhaana Saathiya 2 the Star Plus show produced by Rashmi Sharma Productions has seen the major development of Kokila (Rupal Patel) getting to know of Ahem (Mohammad Nazim) being alive.

Now, Gopi as ordered by Kokila (Rupal Patel) is readying herself to come in front of Ahem in her old wife avatar. She has taken the help of Gehna (Sneha Jain) to make the drawing of the same kind of lehenga that Gopi used to wear.

Kanak (Akanksha Juneja) will sniff about Gopi and Kokila teaming up for something major.

She will take the help of Hetal Fai to know the truth and back story of Gopi.

As per a relliable source, “Hetal will show Kanak the picture of Ahem and Kanak will immediately get to know of Gopi Kaka being Ahem.”

What plan will Kanak make? 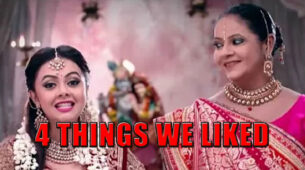