Malhar gives a gift to Kalyani in Tujhse Hai Raabta In the forthcoming drama, Atharva (Shagun Pandey) gives a lift to Kalyani (Reem Sheikh). However, later, she makes some excuse and gets out of his car.

In the meantime, Malhar (Sehban Azim) comes from behind in his car and watches Kalyani. She goes with Malhar, wherein he gives a gift to Kalyani. They have a cute eye lock moment. 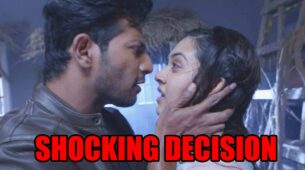