&TV’s light-hearted comedy ‘Bhabhiji Ghar Par Hai’ has kept its viewers hooked with the extremely hilarious events that unfold in the show. Adding to the drama and comedy, the show will bring interesting drama.

In the coming episode, Prem will open a dance class at Vibhuti (Aasif Sheikh) and Anita Bhabhi’s (Saumya Tandon) house and Vibhuti will plan to turn a dance tutor. He will market about the same and get students for his dance academy. He would also influence Angoori (Shubhangi Atre) for the same.

Meanwhile, Tiwari (Rohitashv Gaur) will file a complaint against them and ask the police to shut down the class by telling them that Vibhuti isn’t an appropriate man.

Will Tiwari mange to shut down Vibhuti’s dance class?

We reached out to the actors but they remained unavailable for a comment. 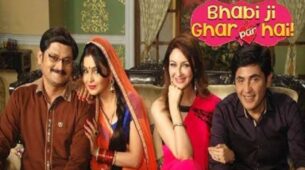