Star Plus Yeh Rishta Kya Kehlata Hai produced by Director’s Kut is up for some high voltage drama.

The audience is aware that Kartik (Mohsin Khan) and Naira’s (Shivangi Joshi) son Kairav (Shaurya Shah) decides to go to Udaipur to meet his father on Father’s Day. During his process, Kairav gets kidnapped.

Now, in the coming drama, Kairav, who is going to meet Kartik calls him before getting kidnapped. Kairav informs him that he coming to Udaipur to meet him. As soon as Kartik tries to talk to him, he hears a man talking to Kairav and taking him along. Before Kartik could warn Kairav, his phone gets switched off. Kartik gets tensed and tries to find a solution.

Will Kartik manage to alert Kairav?

Stay tuned to IWMBuzz for more exciting updates of the upcoming episodes. 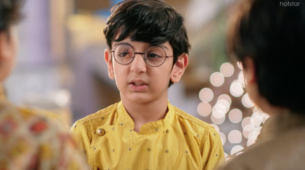