In Ishq Mein Marjawan 2 Written Update Season02 Episode 133 07th December 2020, we see that Kabir challenges Vihaan to play basketball match. Angre and Ishani think that Vansh was expert in playing basketball and from this game they will come to know if he is Vansh or his duplicate. The episode of Ishq Mein Marjawan 2 starts with Vihaan practising basketball game. Ridhima comes and asks Vihaan why did he accept the challenge when he doesn’t know how to play basketball. Vihaan says that he never liked basketball. Ridhima tells Vihaan that he should choose Ridhima in his team as she can play basketball and can handle the game. Kabir enters and says that everything will be exposed in some time.

Kabir chooses Ridhima and Aryan. Vihaan chooses his Chachu and Angre.
Angre goes and tells Ishani to keep eyes on Vansh’s move as they will come to know if he is Vansh or his duplicate. The game starts and Kabir baskets the ball. Vihaan then continuously baskets the ball and kicks Aryan after 10 points, then he kicks Kabir with more 10 points.

Ridhima then gives a tough fight to Vihaan and kicks Chachu and Angre.

Ridhima goes to make another basket when Vihaan touches Ridhima’s waist as Vansh touched in the past.

Vihaan says that he will play. Vihaan baskets the ball and wins. Angre and Ishani get confirmed that Vansh is back. 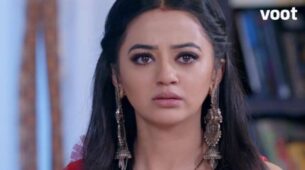 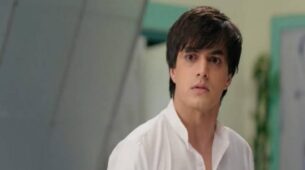