The Kapil Sharma Show 26 May episode today we see Indi-pop icon Usha Uthup and Bollywood playback singer Sudesh Bhosle grace The Kapil Sharma Show. The popular musicians talked about their glorious journey in the industry. Apart from sharing some interesting stories from their lives, the two also made the audience groove to some of their iconic numbers.

Versatile singer Usha Uthup talked about completing 50 years in the industry. Usha shared that she has sung in around eight foreign and 17 Indian languages. Thanking Kapil Sharma, the singer shared that she had a gala time being on his show. While talking about her love for bindis and bangles, she revealed that she put a special bindi with ‘K’ on it, to define her love for Kapil. The comedy star was left emotional at this gesture.

While talking about her distinct style, Usha Uthup revealed that people usually get scared of her looks and voice. And the majority of them usually assume her to be a man because of her voice. Usha shared that she has always been very open and courageous while discussing the way people perceived her. Much to everyone’s surprise, Usha even shared that once a journalist, during an interview, told her that she looks like a ghost.

In a fun segment, Krushna Abhishek got Sudesh Bhosle to mimic Amitabh Bachchan. The veteran singer revealed that he had been mimicing Big B from a very long time. While talking about his inspiration, he revealed that he considers Kishore Kumar as his God. He even said that throughout his journey, it was the iconic singer who motivated him.

Usha Uthup shared that she believes ‘gaane gaane pe likha hai gaane wale ka naam.’ She went on to share that the song “Dum Maaro Dum” was supposed to be a duet and she was to sing it with Asha Bhosle. The two had even spent time rehearsing for it. But when she wasn’t called on the day of recording, she was told by RD Burman that the song would be sung only by Asha. While she was upset about it, a believer of fate, she let it go. And much to her delight, she did get an opportunity to sing the title song “Hare Rama Hare Krishna” with Asha Bhosle. The written update of 26 May 2019 The Kapil Sharma Show episode full story ends here. 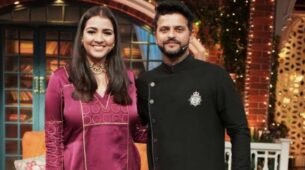