The episode of Kapil Sharma Show starts with Kapil welcoming Himesh Reshammiya and Vishal Dadlani. They enter singing their songs.
Kapil asks Himesh what he did during lockdown. Himesh says that this was the best break he got as he wrote 200 songs.

Kapil asks Himesh to make a song with him. Himesh says that he will surely make a song with Kapil.
Then Kapil welcomes Aditya Narayan. Kapil congratulates Aditya as he got engaged. Kapil says that Aditya was madly in love with Neha. And Neha got married, so immediately Aditya decided to get engaged.

Aditya says that it’s been 10years he has been dating Sweta and now they decided to get married.
Kiku Sharda enters. He says that Indian Idol is coming and he wants to participate in it. Kapil asks him to sing. He says that he will not sing. 1st he will tell his sad story and then will sing a song.

Then Kiku asks Kapil to tell him to get out as he doesn’t have anything to say. Kapil says get out to Kiku, he leaves.
Then Bumper enters. She says that she is heartbroken. Kapil asks Bumper why she is upset. Bumper says that Aditya made many promises to her and not he got engaged to someone else.

Bumper says that she also kept Karwachauth for Aditya, but Aditya left her and celebrated Karwachauth with someone else.
Bumper asks Aditya to be her husband for 1day. Himesh sings a romantic song for them. Bumper and Aditya dance on it.

Kapil calls out 5 singers who got selected for India Idol. They introduce their beautiful voice to Kapil and other guests.
The episode ends with Kapil thanking everyone for coming on their show. 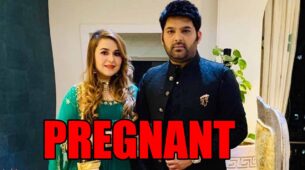 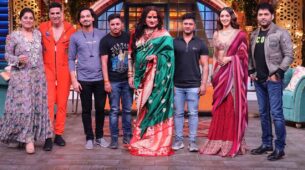