In Khatron Ke Khiladi 10 written update 7th March 2020 episode, the contenders feel the adrenaline surge after going to the area for the primary assignment. Bharti makes her entry. Bharti says that she has got a licence to torture the contestants. She’s asked to kiss a chameleon for fun.

Later, the team moves to the next location for the new task, and it turns out to be a partner stunt. Dharmesh – Balraj and Karishma – Malishka team up for the task. One partner will be locked with their hands and legs chained and their whole body will be swarmed with bees while the other contestant needs to collect keys from a box of bees and save their partner by opening their locks using the keys. Balraj and Dharmesh get the fear ka funda because Karishma and Maliksha outperform them.

Bharti starts her torture stunt with Tejasswi. A massive python is made to creep on her and she yells when it fixes its grasp on her. She’s told to sing with the python on her body. Rohit gives another torture stunt to Bharti. With blindfolded eyes, she’s given shock and is asked to sing.

Rohit announces the next task. The contestant will be tied upside down from a height and will be dipped inside the pool from time to time. There will be 30 flags inside the pool and the contestant needs to collect the maximum number of flags in three minutes. The contestants are Adaa, Karan and Tejasswi. Adaa Khan aborts the task after not being able to perform it efficiently, while Karan Patel and Tejasswi emerge as the best performers. But in the end, Tejasswi emerges as the winner. Karan and Adaa get fear ka funda.

THROWBACK: Take A Look At How Rohit Shetty Along With Shweta Tiwari, Arjun Bijlani Pranked Crew Members On The Sets Of KKK11

From Shamita-Neha To Milind-Akshara: Celebs Who Turned BFFs In TV Reality Shows 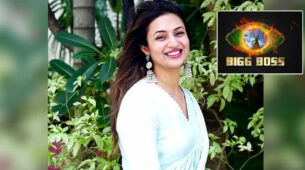 Being on the sets of Dance Deewane is like a homecoming to me: Arjun B... 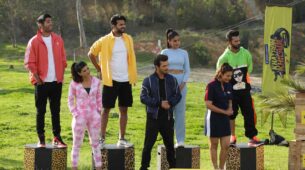 Thank you for the lessons taught during this journey: Divyanka Tripath... Divyanka Tripathi impresses netizens with her performance in Khatron K... Which Outfit Do You Like The Most Of Our Dazzling Queen Divyanka Tripa... 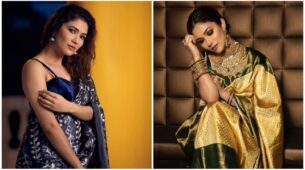 Book Your Sarees From Ridhima Pandit's Wardrobe To Slay Your Looks 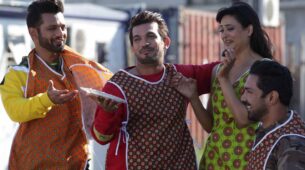