In Today’s episode of Khatron Ke Khiladi 1st August 2020 we see the start of the special season of the show.

The Most Awaited Kharton Ke Khiladi Starts of today as all the contestants are introduced. We see Nia Sharma, Jasmin Bhasin, Rithvik Dhanjani, Karan Wahi, Karan Patel, Jay Bhanshali, Aly Goni and Harsh Limbachiya compete among each other for the title. This week we see Farah Khan host the show instead of Rohit Shetty. Farah Khan introduces the season as we see all the champions make fun of each other of how they failed to perform in their respective seasons of Khatron Ke Khiladi. Farah also introduces the champion jacket and discusses its importance.
Now it is time for the first stunt of the season. Farah explains the stunt involving a 50-feet high hanging ‘Kaali-Paali’. Rithvik and Nia perform this stunt to inaugurate the season. Nia goes in first to perform and impresses everyone as she performs the stunt but she isn’t able to complete it. Its Rithvik’s chance now. He completes this tiring stunt, but he receives a warning for not performing the stunt in the desired order.

After some scary fun with Jasmine, Farah introduces the next stunt. Jasmine and Karan perform this shocking stunt. Jasmine is the first to go in. will she be able to overcome her fear of electricity? She does as we see her complete this stunt, Karan Wahi goes next. Karan goes about through the first stage quite smoothly but later faces some difficulties as he finally completes the stunt. While Jasmine completes this stunt in an exact 30 minutes and Karan takes 11 minutes and 37 seconds.

So, all in all we see Rithvik, Karan Wahi and Harsh go ahead in the race for the champion jacket. It will be interesting to see who among Jay and Karan Patel will join the winner’s group.

Stay tuned to IWMBuzz.com as we bring you more such latest updates. 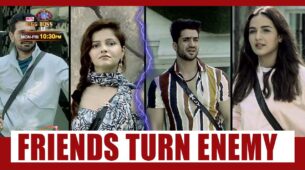