In Saath Nibhaana Saathiya 2 Written Update Season 02 Episode 26 17th November 2020, we see that Sagar tries to flirt with Gehna. Anant comes and warns him, and says that if he tries to do anything wrong,he will kick Sagar out of the house.

The episode of Saath Nibhaana Saathiya 2 starts with Kanak thinking that Kokila and Gopi are planning something big and she needs to find out. Gehna comes to Kanak. Kanak asks Gehna to protect the Akhand jyot and wake her up when the jyot is about to blow off. Kanak thinks that Gehna will protect the jyot all night and morning. Everyone will praise Kanak, as no one will come to know Gehna was protecting the jyot.

Gopi/Ahem Garodia lights the Akhand jyot and tells Gopi Kaka that whatever they will ask from God, he will fulfil their wishes. Gopi prays that Gopi Kaka should get his memory back.
Gopi Kaka tells Ahem Garodia that he feels like he does not belong to that place and belongs to somewhere else. Ahem Garodia tells him that he is not allowed to lock himself in the outhouse, and he should go out and explore. Ahem says that he should attend Praful’s dandiya function.

Coming back, Kanak tells Gehna that no one should see her protecting the jyot.
Ahem Garodia convinced Gopi Kaka to attend the dandiya.

Later, Gopi Kaka asks him to open the cupboard. He opens, a ring falls. Gopi/Ahem realises that it is the same ring which she gave Ahem.
Gopi Kaka says that he can take the ring as it is made for him, and he fixes the ring in Gopi/Ahem Garodia’s finger. Gopi is worried that she cannot wear the ring as she is married to Jaggi. She returns Gopi Kaka the ring as she leaves.

Meanwhile, Kanak calls Jaggi and tells him that Gopi is missing him. She invites Jaggi and asks him to give surprise to Gopi.
Gehna is protecting the jyot and stitching lehenga for Gopi. Sagar comes and tries to flirt with Gehna. Anant arrives and warns him, and says that if he does something wrong, he will kick Sagar out.

Precap: Gopi Kaka gets his memory back seeing the dandiya function. Gopi rushes towards him. Jaggi enters. 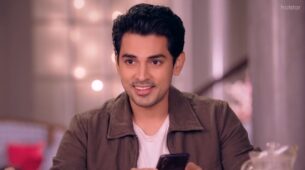