In Saath Nibhaana Saathiya 2 Written Update Season02 Episode 29 20th November 2020, we see that Gopi Kaka is not ready to go to the dandiya venue. Anant enters in a disguise and informs Gopi Kaka that Ahem Garodia fell unconscious at the venue. The episode of Saath Nibhaana Saathiya 2 starts with Kanak and Hema taunting Heeral as she wore the same lehenga which she wore last year. Heeral says she did not wear the same lehenga. Hema says that Heeral posted a pic on Instagram. Heeral leaves as she gets embarrassed.

As Gehna walks to Hema’s children, Sagar comes there. He thinks that today nobody can save her from Sagar. Gehna senses Sagar’s presence. She asks Ambemaa to protect her. The thorn of the rose pricks his hand, and he drops the rose. Hema’s children go to Sagar and ask if he is okay. Sagar yells at them and asks them to mind their business.

Kanak gets Jaggi’s message that he is on his way. Kanak slips from the stairs and drops her phone. Kokila holds Kanak as she is about to fall. Kokila asks her to be careful.
Kokila sees those arrangements and recollects her memories 5 years ago with Gopi and Ahem. Anant comes to Kokila. Kokila tells him that it seems the time has gone 5 years back. Kokila is hoping that Ahem should get his memory back. Gehna leaves as she has to get Gopi Kaka.

Anant asks Gehna to let Gopi Kaka go alone, or he might get distracted.
Gopi Kaka enters the dandiya venue and searches for Ahem Garodia. Gopi and Kokila look at Gopi Kaka.

Urmila says that Jaggi has come. Kokila says not Jaggi but Ahem has come. 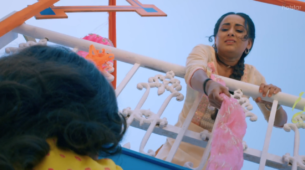 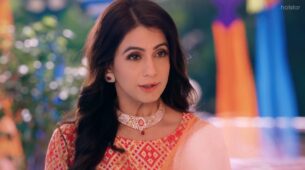