Tujhse Hai Raabta 24 April 2019 Written Update of today’s episode we see how Kalyani has tried her best to stop Malhar from being sent to jail but failed in doing so. However, she stands by his side and vows to get him out. Today’s Tujhse Hai Raabta 24 April episode starts with Kalyani (Reem Shaikh) making everyone do a handwriting check at home to match the ones in the letter. While it turns out fruitless, Aao Saheb, Atharva and Sampada get scared and decide to give Kalyani sleeping pills to fulfill their revenge plan with Malhar (Sehban Azim).

Kalyani deals with a lot of other things during that time too. Her son, Moksh, is mistakenly fed a large dose of medicine which puts him to sleep for a long time too. Her father, Atul, wants Kalyani to break all contact with Malhar.

Anupriya, is the only one who tries to help Kalyani meet Malhar. Kalyani along with Anupriya manages to beat the traps set by others. She finds out that Sampada overdosed Moksh and tried to punish her for it.

She also goes against her own father and decides to take Moksh to meet Malhar in jail. Malhar has no intention of speaking to her but she still answers his call and then asks Moksh to speak to him instead. The doctor informs that Aajoba has paralysis and could not have written the letter.

Kalyani says this to her entire family and finally helps in getting Malhar out of jail. The written update of 24 April 2019 Tujhse Hai Raabta episode full story ends. 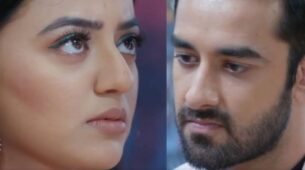