Actor Karan Wahi is not only a versatile actor, but has also proved his mettle behind the camera. The actor has successfully directed a short film titled Have You Met You, which will be releasing today (January 18). When asked about the expectations from his film Karan says, “When we made this film, we made it because we loved the idea and the story. It’s been a cumulative effort of everyone specially Sehban Azim, Gaurav Bajaj and me. Rithvik Dhanjani my close friend also helped me with the end thought of the film and we finally shot it. We made it because we loved it and I have no expectation from people. However, I hope whoever watches the film, likes it.”

Working with friends is always fun. Talking about his friendship with Sehban, Karan says,” Sehban and I are friends and I guess that helps a lot when you work because you need to understand the person in and out. I waited for Sehban for 3 months to give me that one day when we shot because I felt Sehban will be perfect for the film.”

Karan is currently very busy working in multiple projects and has been managing his time well. “I am doing a few things at the moment like Entertainment Ki Raat, India’s Next Superstar, Hate story 4, Sacred Games on Netflix, then Barcode, my other web show that is releasing soon. Work keeps me going and I think there is  no harm in working till you can give your best to it,” he says. 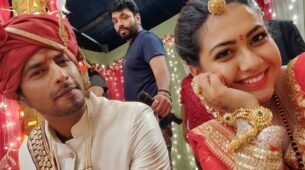