Shruti Seth speaks to IWMBuzz on her new show Mentalhood Shruti Seth, while speaking to IWMBuzz, dismisses accusations of trivialization (the concept of motherhood) against ALTBalaji uber-rich parenting series Mentalhood.

“Agreed that since it only speaks about the high-end SOBO (South Mumbai) folks, I am unsure about the reach of the show. But having said that, parenting is a universal phenomenon and the fundamental creed of doing what you think best for your child kicks in across all socio-economic statuses. For eg, all working women, be it a small firm secretary to the CEO of a big company, all go through the same angst of leaving kids behind at home. Then there is the toxic masculinity issue as well,” says Shruti who had also done Disney parenting show The Suite Life of Karan &Kabir

“The same universal conflict would have been equally engaging, had the setting been more modest. Here we have just made it larger than life,” she adds.

Do such mundane issues even matter in the face of pandemics (Corono Virus) threatening the whole world?

“At the crux, we all humans are selfish, and we don’t get perturbed about things until it directly affects us. We might comment on it on social media, but our life does not stop,” says Shruti, who is also doing Star Plus show Dil Jaise Dhadke… Dhadakne Do. She also played a feminist Major in recent Amazon series The Forgotten Army – Azaadi Ke Liye.

“So in the same vein, such parents though being small in numbers have their real problems which Ekta (Kapoor) has so well defined. She also has pulled all stops to promote the show which is very important these days,”

Talking about her character, she says a “lot more will come out over time as to what separated her from her college sweetheart. My cuckoo earthy mother trait is in variance with my on-screen husband’s worldview.”

Here Shruti adds that she identifies a lot with not only her character but even the other five leads (Sandhya Mridul, Shilpa Shukla). They are prototype mothers .”

in closing, when asked about working with Karisma Kapoor, she says, “I have seen her right from her heyday, but she carries her fame so light that it made shooting a breeze. Ditto with others.” 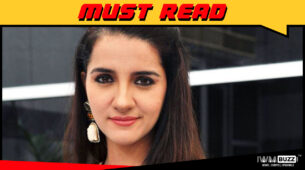