Gunjan Uttreja turns host yet again, and this time it is for a uniquely conceptualized celebrity chat show, Bubble Baat. The good looking and super-smart actor/anchor Gunjan Uttreja, who has been missing from action for a while, is back with a bang. He will soon host a fun YouTube-based chat show, Bubble Baat, involving celebs from all walks of life, and set in a bathroom.

Gunjan was last seen hosting the Indian franchise of world biggest singing reality show ‘THE VOICE’. The suave anchor is known for his witty sense of humor. His infectious energy, deadpan delivery of hilarious one-liners and anecdotes, has won the hearts of millions across the globe. In ‘BUBBLE BAAT’ his relationship with the guests has helped them open up to him & shared some exclusive stories and gossip, which has never been heard before.

The series is produced by Indian Storytellers. Producer and Creator Ritika Bajaj says, “We all develop special relationship with our bathrooms. Bathrooms have always been the 1st place where an artist started to sing or act. It’s your real world away from lights, glamour & paparazzi. This is the place where you are yourself sitting on the thinking pot. So what better place to have Unguarded, Unabashed, Unadulterated conversations.”

Says Gunjan, “Every artist first acts and sings in the loo; plus, it is the only place where you are completely safe from the world. On a more serious note, we wanted to create a light atmosphere, like when we go to the rest room and gossip. However, unlike others, who use web to sell sleaze, we don’t follow the potty humour route. There are no vulgar jokes; just free and frank conversation that does not judge any one.”

“The first season of this weekly Indian Story Tellers presentation will have ten episodes, of 15 minutes duration each. “We have just released the teaser and it has already gone viral. Do check out the first webisode, which will go live on the World Wide Web, possibly on the 10th of this month.”

He refused to spell out his guest list, except singer Benny Dayal and India’s first twin playback artists, Sukriti and Akriti Kakkar, already seen in the trailer. “Why spoil the fun?” he says.

When asked point-blank about what the USP of his chat show is, when there are several others already, he says, “Well, why don’t you find out for yourself? Bubble Baat is not just a show; there is much more. Full marks to Ritika, for creating such a unique concept.”

“I will bring my own personality to the fore. It all boils down to the anchor, who can make or mar the show. I am a big fan of Karan Johar, the anchor. Many have aped his Koffee With Karan style, but most didn’t work, for it is not the questions posed but who is asking, and how.”

Looking ahead, Gunjan, who gained name and fame with Madhubala (Colors), might do a short film. “The web format excites me. One of the main reasons of staying away from the tube is that, beyond a point, it gets repetitive.”

We are eager to watch Bubble Baat…. Who says, we can’t shoot at home? Producer Ritika Bajaj 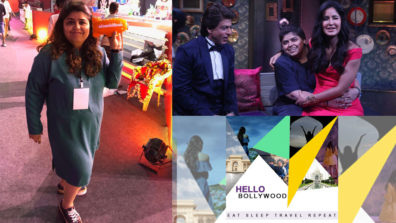