In conversation with Flora Saini The highly talented and good looking lady, Flora Saini, who had impressed one and all with her dare-bare act in Alt Balaji web series, Gandii Baat 2, now wants to move a notch ahead.

“I don’t mind doing more of the bold stuff, but then there should be a strong underlying story as well. Sadly, our industry follows the herd; so post garnering lots of praise for my bisexual efforts (Gandii Baat), I am only getting similar roles.”

“As an actor, it is important to showcase my other acting facets as well. I don’t want my audiences to be under the wrong impression that Flora can’t go beyond all this.” She was noticed for her recent Stree ghost portrayal as well.

“Hope a day comes when makers trust us with genres beyond the tried and tested, as only then can we really change the graph. There is much more to me than what you have seen so far,” says this actor, who has been around for nearly two decades, doing Hindi and South films.

“Hence I am just being a bit choosy about what comes my way. I would love to work with people like Alt Balaji, for they know how to make their artists comfortable while shooting intimate scenes. Most importantly, they shoot it very aesthetically, smartly playing with lighting, music and other elements.”

“There are certain OTT players who handle it very badly, focusing only on the lovemaking parts, rather than the story per se. The boldness is just one part of the character and not the be all and end all as some makers try to convert it, in an attempt to garner eye balls. I have had one such bad experience, which has kinda made me wary.”

Flora will next be seen in Amazon Plus’ Inside Edge 2. “There is no bold role here unlike season 1, as the characterization did not need the edginess this time around. The shooting is more or less complete, with a little patch work left.”

Looking ahead, Flora would also not mind doing limited TV series, which have very strong characters. “Recently I was offered a fantasy show role, but was not very comfortable with its meat.” How did Anveshi Jain's Life change After Gandii Baat? 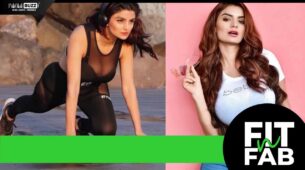 3 Anveshi Jain Outfits That Prove Her Fashion Game Is on Point!