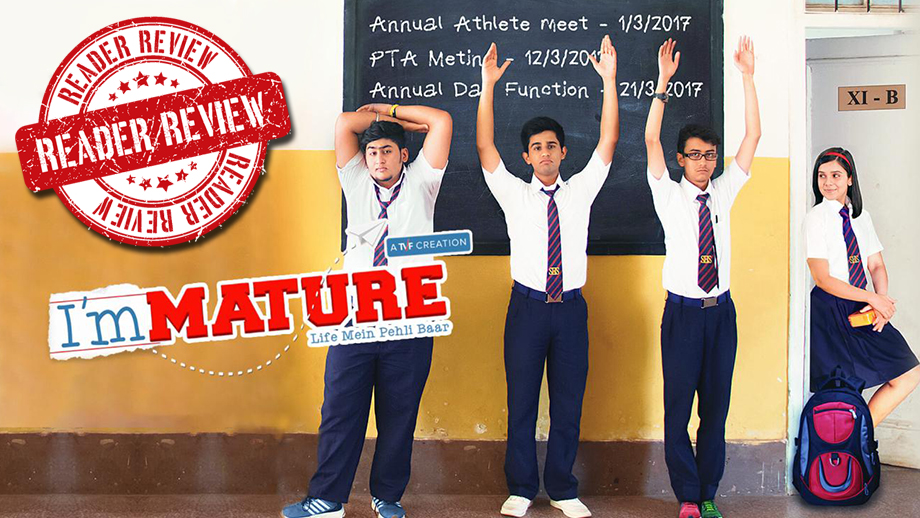 MX Player has recently released a startling and amazing web series named “Immature”. A decent story that reminds one about your memories of pre and post school days. It is a complete story that includes a mixture of drama, fun, love and college life; a content which is picture-framed, a reminiscence of all events during the teenager stage (College days).

Who doesn’t miss those school days? Hopefully everyone does. We especially miss our old buddies, with whom we used to share pencils, notes, make fun during lectures, bunking classes at a time and finally sharing the same tiffin-box during break time. And in every class we had that one chashmish friend who is unique but seems like out of the world, a friend who has a crush on someone of the same class and a friend who adds masala to the story by bragging more about things he had never done in real. In a way, it reminds me of the movie 3 Idiots (group of 3) but the story was different with maturity in it.

“Immature” is a one of a kind series, which brought those school and college days back to the present. Dhruv Sharma (Omkar Kulkarni) is a kind of indecisive, awkward kid, whose decisions always seem a bit unstable, making him end up in a perplexed state. Everyone is good at giving suggestions. Kabir Bhuller (Chinmay Chandranshuh) is one of the leaders of the group, adding up with Susu (Visshesh Tiwari). So, Kabir gives some random visualization ideas to Dhruv’s bamboozled questions. All three are leading a life of twirls, turns and twists. It is a melodramatic confusion, a never-ending tale and a puzzle, until Dhruv looks at a girl named Chhavi Upadhyay (Rashmi Agdekar) who is a front bencher, class topper and teacher’s favorite. She is Dhruv’s classmate and he loves her but hesitates to convey it to her in the beginning.

Kabir forces Dhruv to buy a bike instead of using his old, deformed bicycle. But his marks make him feel that his parents will definitely deny him the bike because of his meagre marks and low grades. But somehow kids are good at getting what they want from their parents by using some hallucination tricks. In the same way, Dhruv finally gets what he wanted, but ends up getting his sister’s pink scooty. But he doesn’t know that this scooty will change his life.

The story between Dhruv and Chhavi begins here. All the drama in classrooms, annual day celebrations, bunking classes, examinations, playing flames in classrooms, dumb charades and susu crying for his teacher crush after she gets engaged, all these show the real school stuff. Soon, Dhruv gets to know that Chhavi has someone in her life. His heart too breaks along with Susu’s (whose crush, a teacher named Sonam is getting married). Kabir suggests a plan to fight back, after drinking alcohol. Dhruv, after converging his guts, tries to fight Chhavi’s boyfriend, Shantanu. But he feels more tranquil after he gets to know that Shantanu and Chhavi have broken up. At the same time, exams are yet to start, but they end soon as time speeds by. And Dhruv finally gets his time to confess his love to Chhavi and ask her out.

Later, after an awkward and embarrassing talk outside the school, Dhruv seems to be filled with exhilaration, zest and elation after Chhavi calls him and agrees for a date once their exams are over. A little bit of awkwardness is shown between them, as it’s the first date for both of them; but later, they enjoy each other’s presence and company. Certain scenes tell us about love and relationships and also about long distance relationships. Dhruv fumbles a bit on his date with Chhavi, but in the end, he takes her running to the school. He gifts her a t-shirt with lots of memories on it, consisting of her friends’ thoughts scribbled on the t-shirt, expressing a good-bye message as she is leaving for Kota for further studies. Finally, Chhavi kisses Dhruv, which he really wanted, but was hesitant to ask.

Unfortunately, there is something which is considered fashionable to show – “Alcohol drinking”. In this series, even the kids who were underage were shown drinking at the bar, which creates a false image to the viewers and the generation, stating how school kids are turning out. This scene drags for a long time, which the director thought would be ostentatious or flashy to watch for the viewers. But it isn’t so. It actually creates a negative impact in the minds of youngsters and parents for sure. I guess this is the only scene which might create some negative thoughts behind the walls. But the overall script is a heart winning one. Kudos to TVF and MX Player originals to create such a premiere web series, which has won many hearts till now. (Keep entertaining)

Rating: 3.5/5 (Thanks for reminding us of our school and college memories)

Other senior stars along with these young stars are Jitendra Kumar, Nidhi Singh, etc.