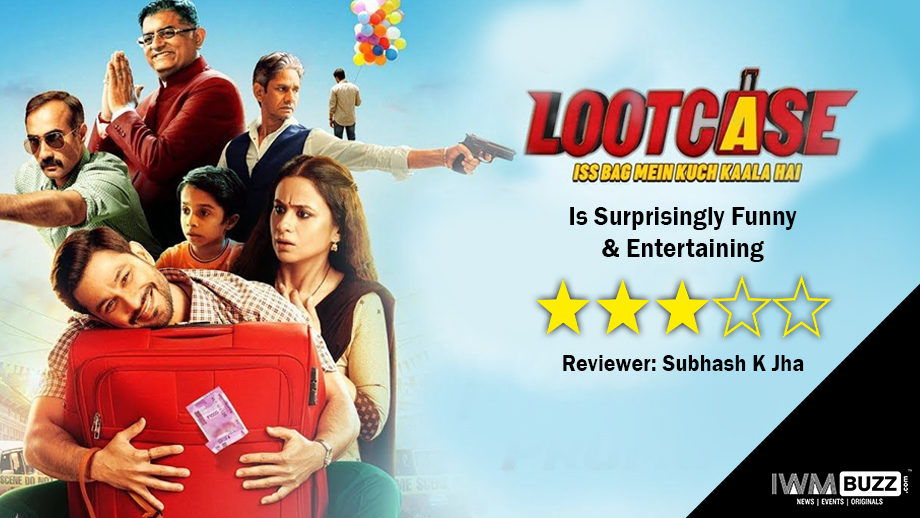 I have to be honest. I haven’t LOL-ed so many times in any other recent film. And for once, the laughter is intended. Lootcase is a neatly written comedy about what happens to a middle-class man’s world-weary head when he suddenly finds a gigantic suitcase filled with banknotes.

Does he…errr…surrender it to the police? Or does he stash the money away from his wife’s prying eyes and does he spend the money on a new microwave and a Sunday outing at the waterpark with his son and wife?

Lootcase is a fun take on avarice and nemesis, two words that I’m sure the film’s hero has no idea of. As Nandan Kumar our Everyman with a windfall to reckon with, Kunal Khemu is a laugh riot. I have always felt Khemu is the true inheritor of Farouq Sheikh’s working-class ingenuity. Khemu crashes into middle-class crises like a drunken man walking into a glassdoor. His Nandan in Lootcase is hootcase.

Khemu gets exceptional support from the supporting cast: the ever-dependable Rasika Duggal as his nagging but upright wife. Also outstanding is Gajaraj Rao as a sleazy politician who wants the fund-flush suitcase, not for the money but a file hidden in the cash. The way Rao gets favours out of those owe him some, by sending them on instant guilt trips, just shows how far skilled writing can take a plot.

So go ahead Kapil Sawant and Rajesh Krishnan, take a bow while we laugh some more.

Ranvir Shorey is the odd one out as a sullen cop turned rogue who doesn’t smile even once in this hilarious comedy. But my favourite character in this hoot of a comedy is the delightful Vijay Raaz as a fierce fan of the National Geographic channel who keeps urging his two favourite henchmen to subscribe to his favourite channel for them to understand his animal metaphors.

Spoiler ahead: by the end of the film one of the henchmen does the needful.

The devil in this wicked comedy undoubtedly lies in the casting. Every henchman, and henchman’s henchman will have you in splits. Even Nandan and his wife’s next door neighbour is a masterclass in comic timing when he comes to collect his key.

In these trying times of crisis and depression, Lootcase is just the film that will chase your blues away….into the nearest currency-counting machine. Highly recommended.