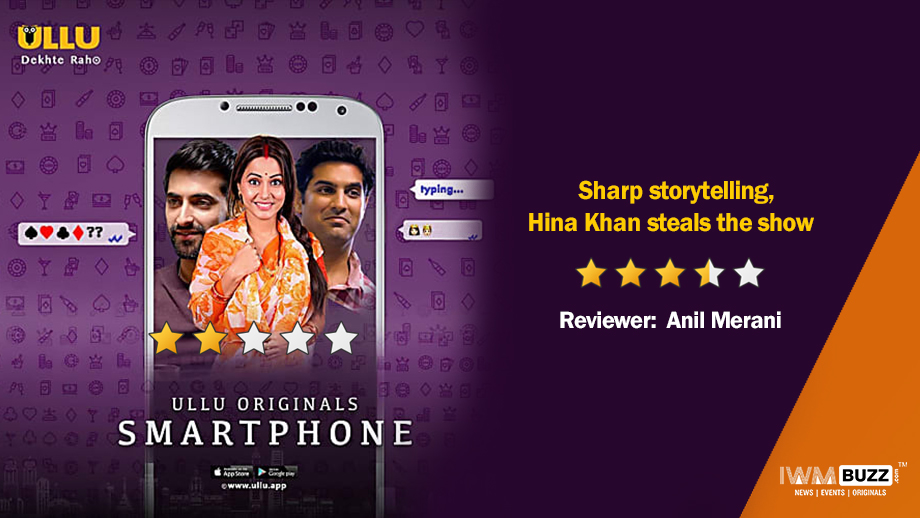 A smartphone can, indeed be smart.

New Hina Khan-led Ullu short film Smartphone shows how handheld devices can be a game-changer in life. Technology has always been morally neutral, leaving it the conscious of the user.

The plot is quite simple; we have a typical MCP guy Chandan (Kunaal Roy Kapoor) who weds a homely rural girl Suman played by Hina. He loves hers hence ask her to put on the ghunghat, when the taxi driver checks her out. But he eyes other women.

Chandan’s biggest weakness is gambling, and he even insults his wife in front of his friends calling her dumb. The word smart is often used in the story (you will get the drift in the ending ). He gifts Suman a smartphone allowing her to stay in touch with her mom. When Suman requests her hubby to install WhatsApp, on her phone, he ignores, but friend Vicky (Akshay Oberoi) does the needful. She calls him Bhaiya. Chandan’s’ womanizing ways further get caught when he accidentally sends a girl pix to his wife and expects her to clam up. The plot thickens when a losing Vicky puts his girl on the line during gambling and luckily wins. Suman thanks her lucky stars.

But next time a folding out Chandan also follow suits putting wifey on the table. Yes, he does take her permission. Why don’t you watch this nineteen minutes film to find out for yourself what happens next? The twist in the tale will leave you bewildered.

Hina is spot-on as the desi bahu, down to the toe, costume, and body language. Over the years, she has shown her versatility. You will not say, Suman was the same gal who last year walked the Cannes Red Carpet.

Kunaal is equally good as useless hubby; you want to slap him hard. Akshay’s measured acting stands out in the crowd.

Kudos to producer-director Ankush Bhatt for crafting an edgy story sans lovemaking scenes, leaving everything to suggestion. Acquisition of more such content will also help Ulllu come out of the sex bracket.

A breezy tale like Smartphone is just what the doctor ordered to wish away lockdown blues.

Moral of the story, never underestimate women, lest there will be hell to pay. And yes, please bar smartphones when gambling, as you might end up losing much more than just money.